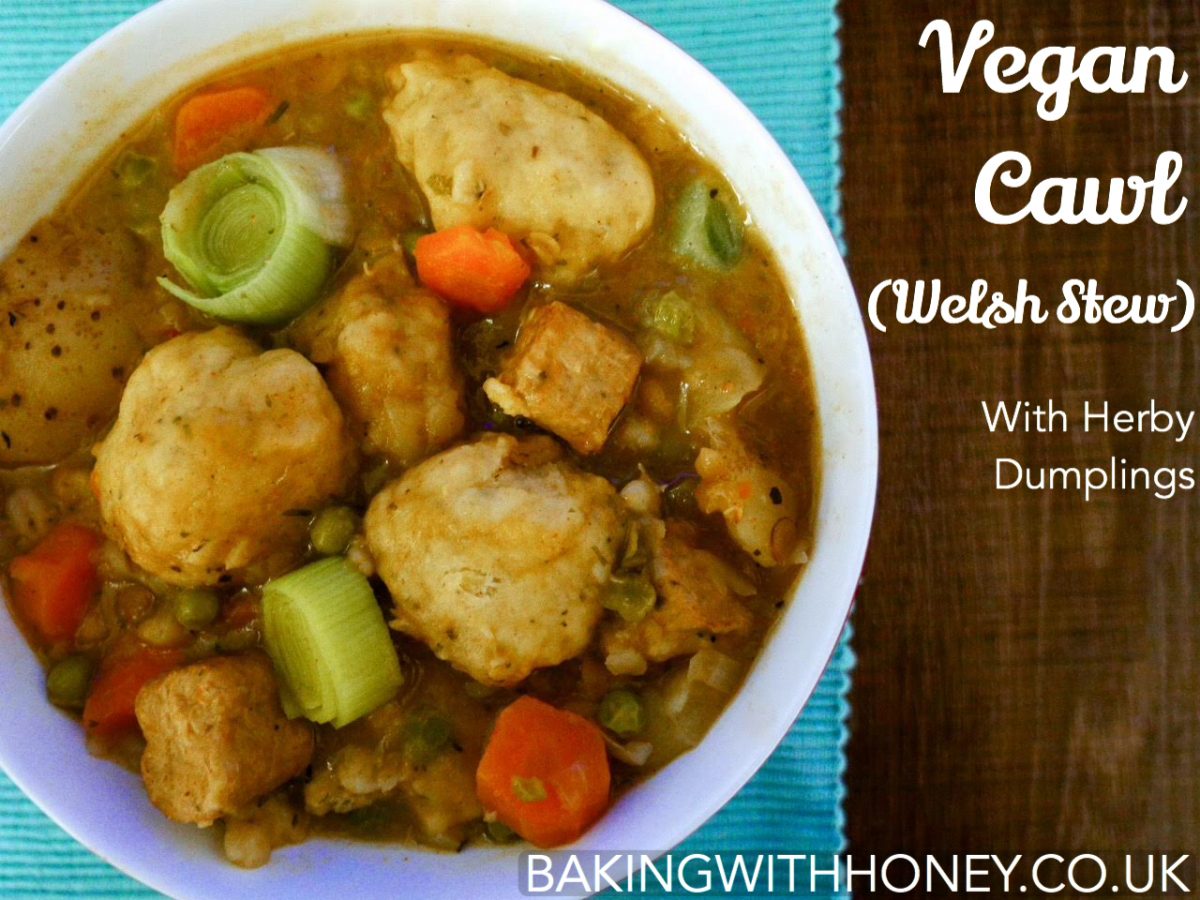 Cawl is technically Welsh for soup, but it has evolved to become the catch-all term for any casserole, stew or broth. (If you’re unsure how to pronounce it, try saying Cowell – as in Simon Cowell – but without the ‘e’ sound.) I love a one-pot dish, and a stew is by far one of the most economical and comforting ways of feeding your family. Not to mention hassle free – if you start it off in the morning, you can ladle it into a slow cooker and leave it all day while you get on with your business and come home to something hot and fabulous by 6pm. The variations of cawl are endless; there are many methods of cooking it, and every Welsh family has their own take on it.

Traditional cawl is based on root vegetables, Welsh lamb and the essential leeks. My completely inauthentic (but still tasty and satisfying) vegetarian version is thicker than most – due to personal preference, and conveniently, the pleasing result of the excess flour in the herby dumplings I always top it with. (My Nana always did this too). Apart from this slight variation, I too make full use of winter veggies as with the original and use a meaty substitute – frequently Quorn steak strips, but sliced veggie sausages are great too – instead of lamb.

I add a measure of barley, lentils and split peas (commonly found in supermarkets, labelled ‘broth mix’) for additional protein and texture; I also add a good slosh of sherry in honour of my much-missed Welsh grandparents. I tend to make cawl during the colder months – the last bowlful is normally served by Easter – but spring and summer variations of cawl can include additions such as runner beans and peas with a smattering of fresh chopped mint towards the end of cooking. Cawl, like other traditionally variable national dishes such as Irish Stew – is something you tweak to make your very own. This recipe uses approximately a kilo of chopped veg; you can vary the exact vegetables as you please or according to season – just keep the overall quantity roughly the same.

You can cook this in a slow cooker with a 3.5litre capacity (slow cookers do vary but it’ll take about 3-4 hours on high, 4-5 hours on medium)  or a very large, heavy bottomed saucepan on the hob (for about 45 minutes) or in the oven on a low 150c setting for about 2 hours. It’s done when it’s done.

Optional flavour enhancers of your choice: Try a dash of HP or soy sauce, a teaspoon of Marmite or vegetarian miso etc. *2017 update* I also LOVE to add 2 tsp of Schwartz salt-free “meat spices” – like the chicken and steak ones (they smell so good! Funny how the all the things that make meat taste good are actually vegan!)

For the dumplings (optional): Make in advance or quickly make while waiting for the cawl to reach the initial boiling point, see below.
200g *self raising flour (you can use a combination of white and wholemeal if you like.)
1 tsp dried mixed herbs
100g very soft butter or vegetable spread (I frequently use Pure and it works just fine.)
3-4 tbsp cold water to mix

*I rarely use self raising flour anymore. I just use plain and just add 1 tsp baking powder – it’s exactly the same

Make it Vegan! Use firm, seasoned tofu instead of Quorn, and a vegan spread such as Pure in the dumpling mix. 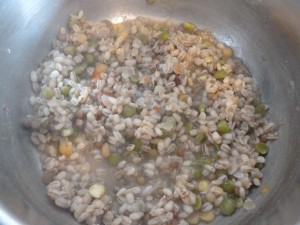 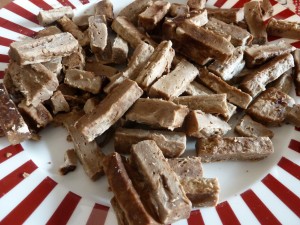 Pre-cook the broth mix by covering with plenty of cold water and bringing it to the boil. Cook for 15 minutes until almost done. (I pre-cook because otherwise it would absorb a huge amount of stock which is needed later.) Drain and set aside. Meanwhile, defrost the Quorn steak strips or sausages (if frozen) by spreading on a plate and cooking on high in the microwave for about 3 minutes. 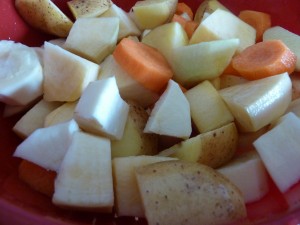 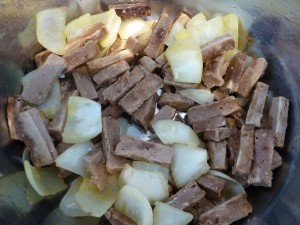 While the broth mix is cooking, cut up all your veg. The onions should be roughly chopped (I cut into eighths) and your parsnips, swede and potatoes should be chopped into approximately 1″ chunks. Slice the carrots and leeks into chunky rings. Store the leeks in the fridge until near the end of cooking time (as these take no time at all to cook.) Soften the onions in olive oil on a very low heat for 5 minutes, then add the defrosted Quorn and cook for a further 5 minutes. 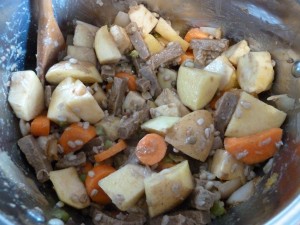 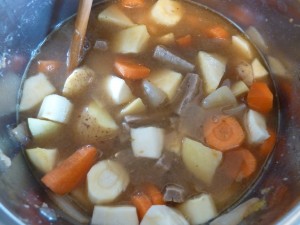 Pour in the sherry and reduce for another few minutes before carefully tipping in all the chopped vegetables (apart from the leeks) and the drained broth mix. Try to coat everything as best you can with the wine, feel free to add a little more. Now pour in the vegetable stock and any or all of the flavourings suggested above. Soy sauce, Marmite, HP and vegetarian Miso paste all add a good kick of flavour and colour. Season with salt and pepper as you please. Stir gently and turn up the heat. 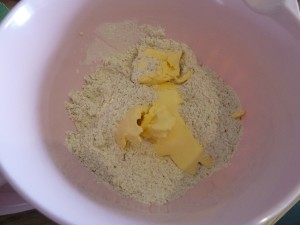 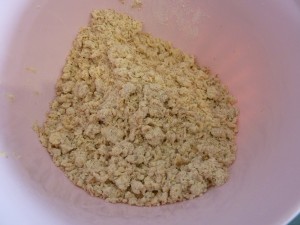 If you haven’t made them already in advance, you can make the dumplings now while you are waiting for the cawl to reach boiling point. Measure the flour and mixed herbs into a bowl, then rub in the very soft butter or vegetable spread. This is the work of moments; use a light touch and do it until it looks roughly like breadcrumbs. 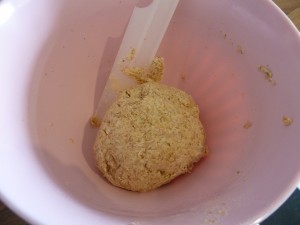 Then sprinkle in the water. Bring the mixture together using your hands or a spatula then break off walnut-sized pieces and roll into balls – you’ll get about 16 dumplings from this mix. Toss them in a bowl of flour to help prevent them sticking to each other. If you are going to continue cooking your cawl on the hob, use a slotted spoon to gently place the dumplings on top. If you are transferring the cawl, for example to a slow cooker, pop the dumplings on top once you’ve transferred it and cook as below. 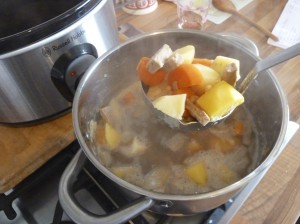 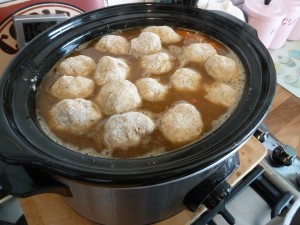 Once your cawl has reached boiling point, you can do one of the following:

Hob: Lower the heat and simmer on the hob for about 45 minutes, covered. Keep an eye on it and stir now and again to prevent sticking.
Slow cooker: Remove from pan from the heat and ladle the cawl carefully into your slow cooker. Cook on High: 3-4 hours, Medium: 4-5 hours or Low: 6-8 hours (whichever suits your day).
Oven: Transfer the cawl to a preheated oven (150c/300f/gas mark 2) for about 2 hours.

The sliced leeks should be added fairly late in the cooking process otherwise they turn to mush. Squash them into the cawl about 15 minutes before the end of cooking time for oven and hob; about 30 minutes in the slow cooker. It is really a matter of just softening and heating them!

Garnish with fresh parsley, serve in big bowls with plenty of buttered bread. This feeds around 4-6 adults, depending on appetite! If you have left-overs, allow it to cool completely before storing it in the fridge. Reheat in a pan on the hob; you will need to add more boiling water, stock water or sherry (as you please) to bring it to a good consistency. 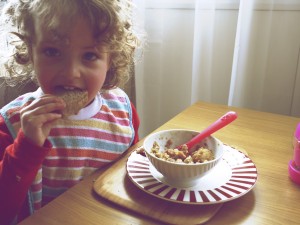 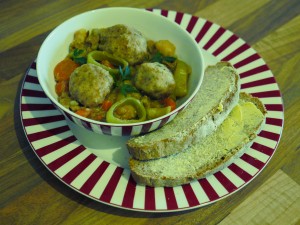