DIY Sosmix (Sausage Mix) Recipe // A Blast From The Past 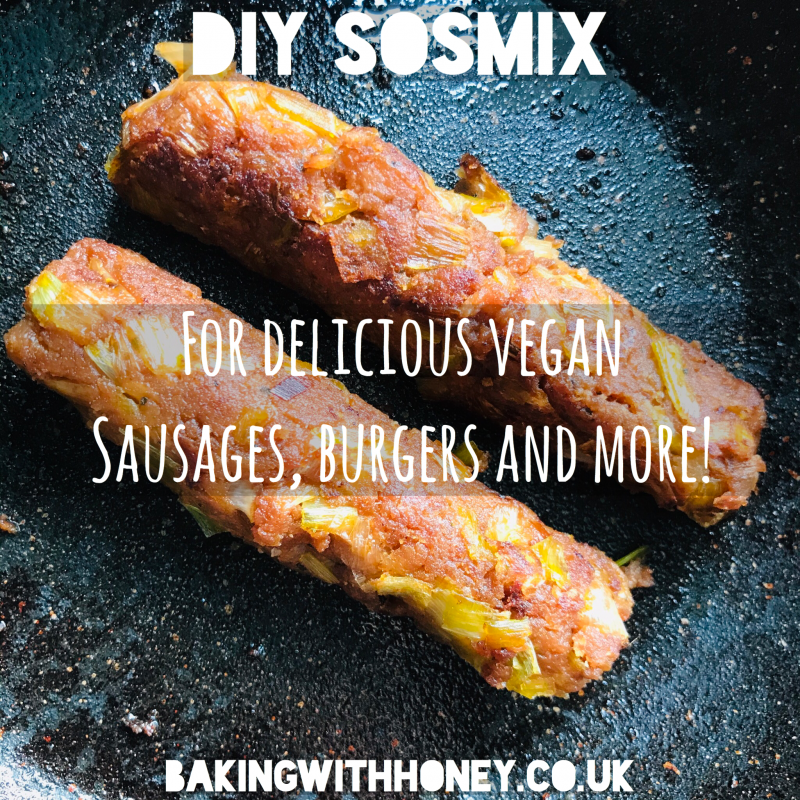 I must admit, I wasn’t sure when – if ever – I would post this recipe. To say it’s a bit niche would be an understatement. But after a couple of years of playing with the ingredients and finding lots of ways to use it, I am glad to have a constant supply of this in my cupboard – and perhaps it will be useful to others, too. Particularly now, in this weird time we find ourselves living in when lockdown-induced panic-buying means I can’t easily get boxes of those spooky vegan sausages from the supermarket.

I have distant memories of my Nana using Sosmix – back in the early 1990s and quite likely before that. A dry mix of seasoned and flavoured soya and rusk (ok it tastes better than it sounds), Sosmix was every vegetarian’s go-to store cupboard essential for homemade sausages and burgers. Mixed up with water (very like stuffing mix) and combined with onions, garlic, cheese or whatever you like (or nothing at all) it was then shaped and fried or grilled; you could also get creative and add it to nut roasts and rissoles.

This DIY approach fell by the wayside as ready-made veggie sausages and burgers became widely available in supermarkets and Sosmix fell out of favour. After some recent digging, I found versions are still available to purchase online, but they contain palm oil and stabilisers and, surprisingly, are sold at rather inflated prices. 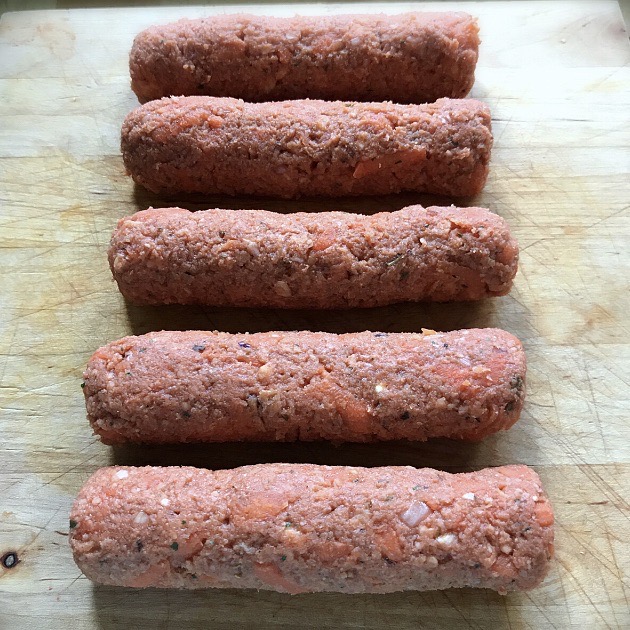 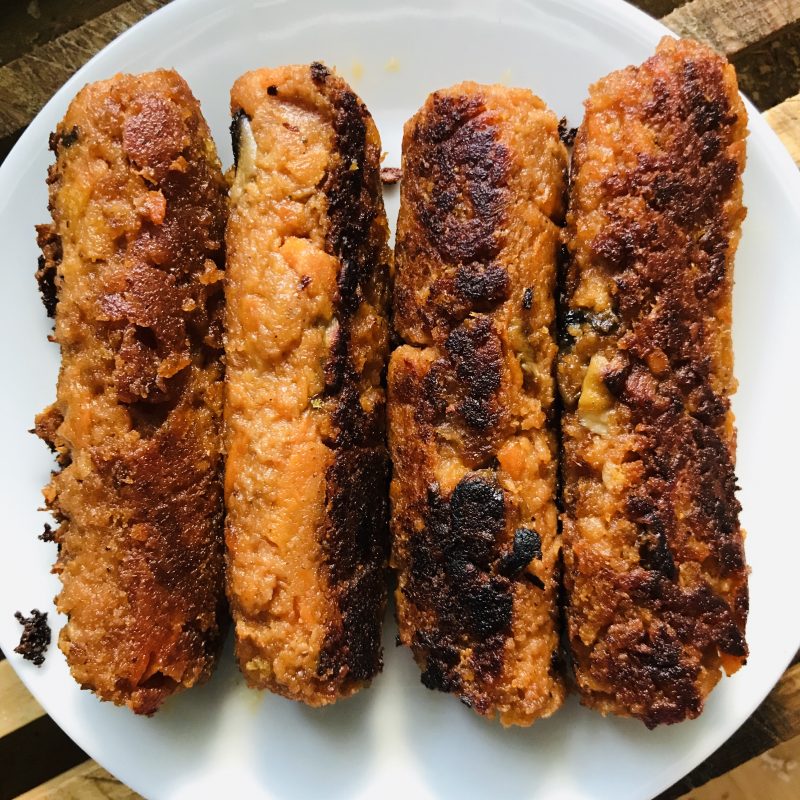 The point of Sosmix was that it was incredibly economical.

So, no doubt triggered by indignant nostalgia, I did what I love to do – I studied the ingredients and created my own version. After many trials, I’ve settled on this. I’m very pleased with it; it looks, smells, works and tastes as I remember. In fact, when I made my first little test batch, I was instantly transported to my Nana’s kitchen on a Sunday afternoon.

In keeping with the original spirit, it is also satisfyingly inexpensive to make. You can make a kilogram of the mix – that’s about 50 sausages, more than I could ever fit in my freezer – for under £5. 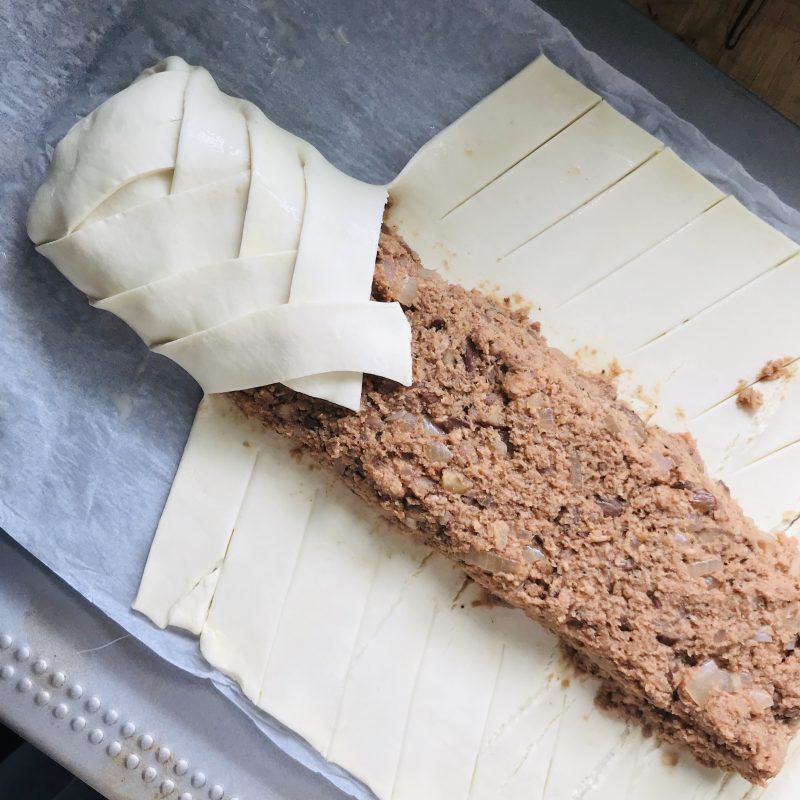 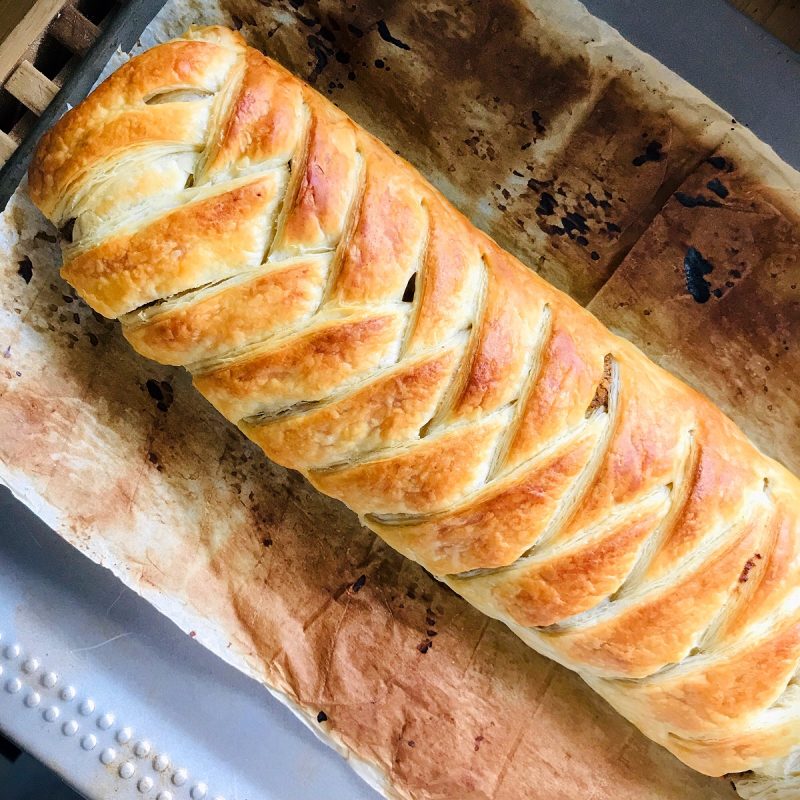 Sosmix really benefits from being hydrated with plenty of flavours. Treat it as the basic ‘sausage meat’ component in a recipe and combine it with fried onions, garlic and whatever else called for. I use it as a base for absolutely smashing apple and walnut cheesy sausage rolls and a wonderful chestnut wellington at Christmas (see pictures above) – two recipes I hope to share with you in the coming months.

The recipe below doesn’t include salt as I like to add fairly salty flavourings when I make up the mixture. Soy sauce, Marmite, Worcester sauce (check the label; Biona make a great vegan one) and miso paste all contribute to the overall savoury saltiness! You’ll definitely need a pinch of salt if you’re not adding anything else at all. Below you’ll see one of my favourite ways to hydrate and flavour, but hopefully you’ll find your own way of doing it.

This is a great standby mix to have on hand during lockdown – or any time for that matter. 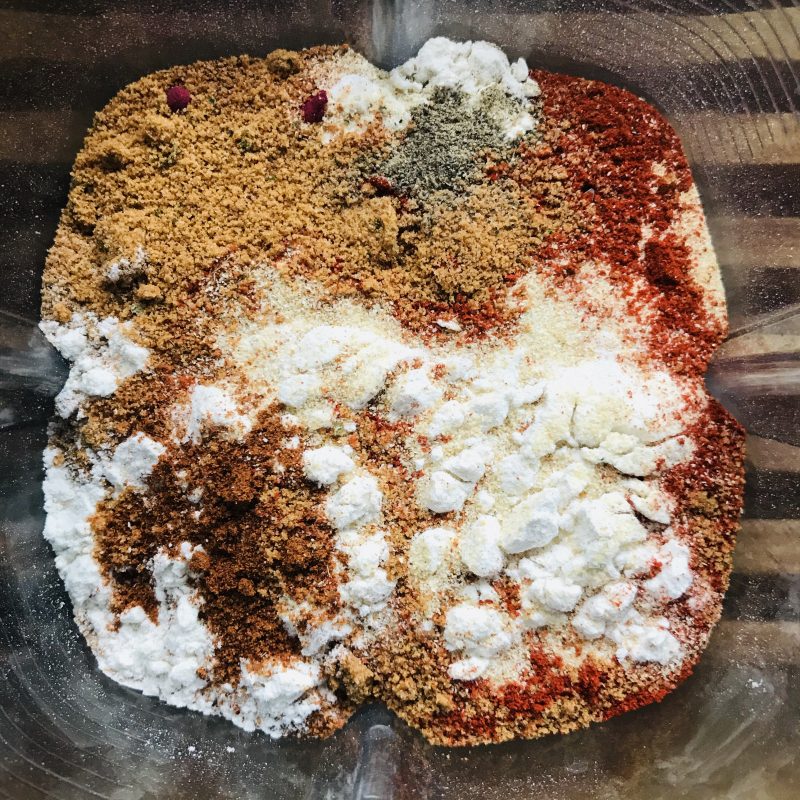 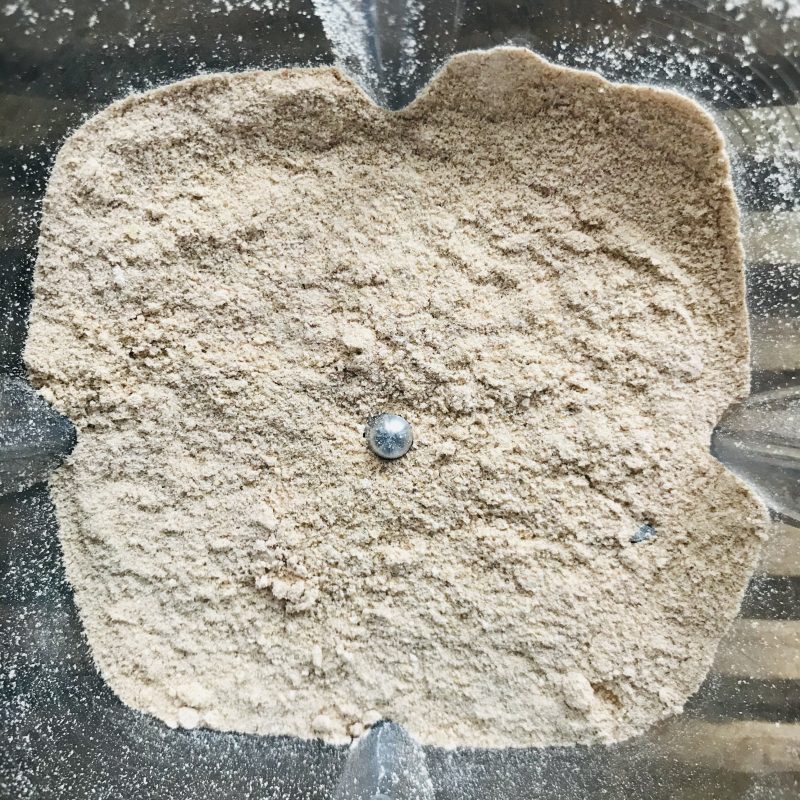 Place everything except the soya mince and stuffing in a large blender or processor (I use a Vitamix) until you have a reasonably fine powder. 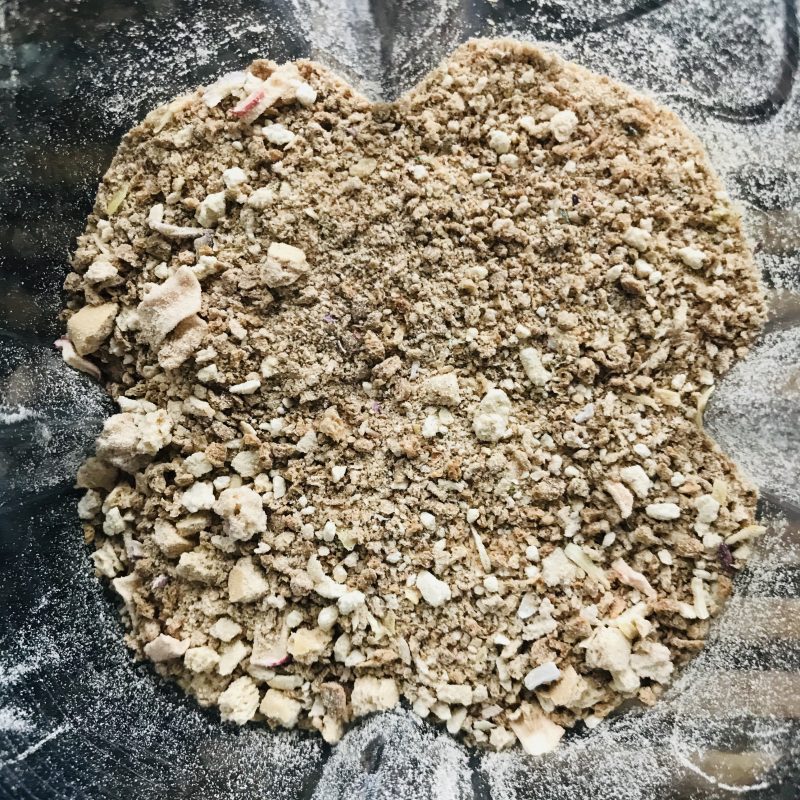 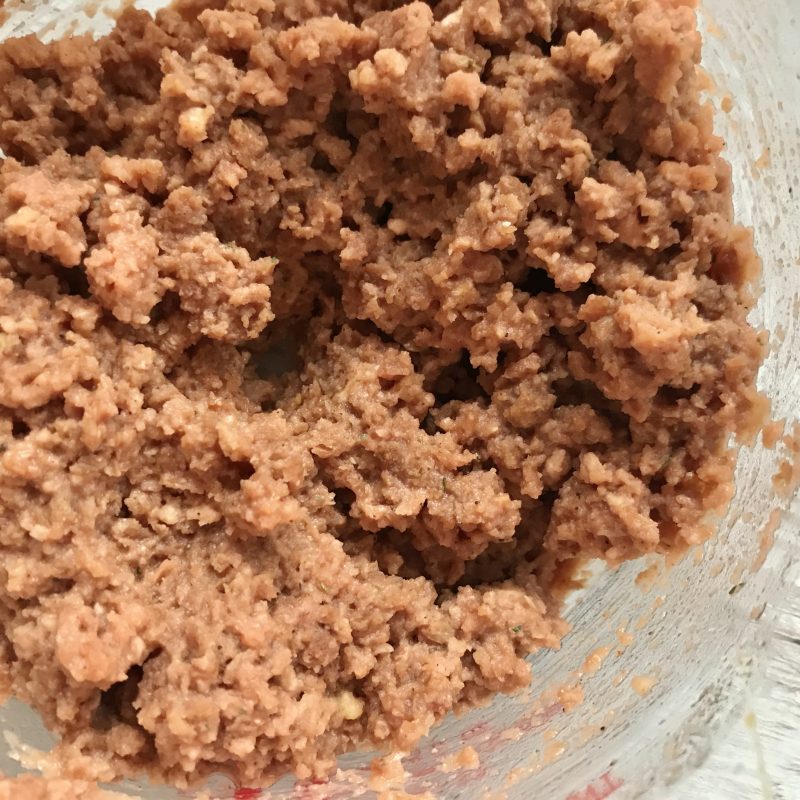 Then add the soya mince and stuffing mix and pulse until just combined, see pic above left. Do not try to make a powder at this stage, you’re aiming to keep some texture. Store the Sosmix in an airtight container and give it a stir each time you use it as the contents will settle a bit.

The pic on the right shows what it looks like after it has been rehydrated.

You’ll hopefully find your own way to get creative with this, but in the first instance it’s helpful to have a guide to rehydrating. Sosmix absorbs just under double its own weight in liquid. Every 50g will need roughly 85ml liquid.

You can just use boiling water, or include a little tomato puree, oil, soy sauce, Worcester sauce, miso etc to make up the weight. Here is a quick guide to rehydrating (I have this written on a sticker on my tub of Sosmix!)

I like to measure and whisk up the wet mix first in a large Pyrex jug on the scales, then stir in the Sosmix. You’ll need to let it stand for about 15-20 minutes before using, or you can make it up in advance and keep it in the fridge until you’re ready to use it.

Add 100g Sosmix and mix well. Let it stand for at least 15 minutes.

Meanwhile, fry a finely chopped onion and a small grated carrot (optional) until soft. Carefully mix these with the prepared Sosmix then gently form 6 large sausages using a little flour to prevent sticking. They can be quite fragile; allowing them to rest for a while before frying can help prevent them breaking up.

Fry in oil for about 5-10 minutes on a medium heat, until hot and crispy looking. You can cook them in the oven if you prefer; they’ll need around 20 minutes at 200c, turning half way through. They can be a little fragile but firm up as they cool, and will keep happily in the fridge for a few days if you’re not eating them immediately.