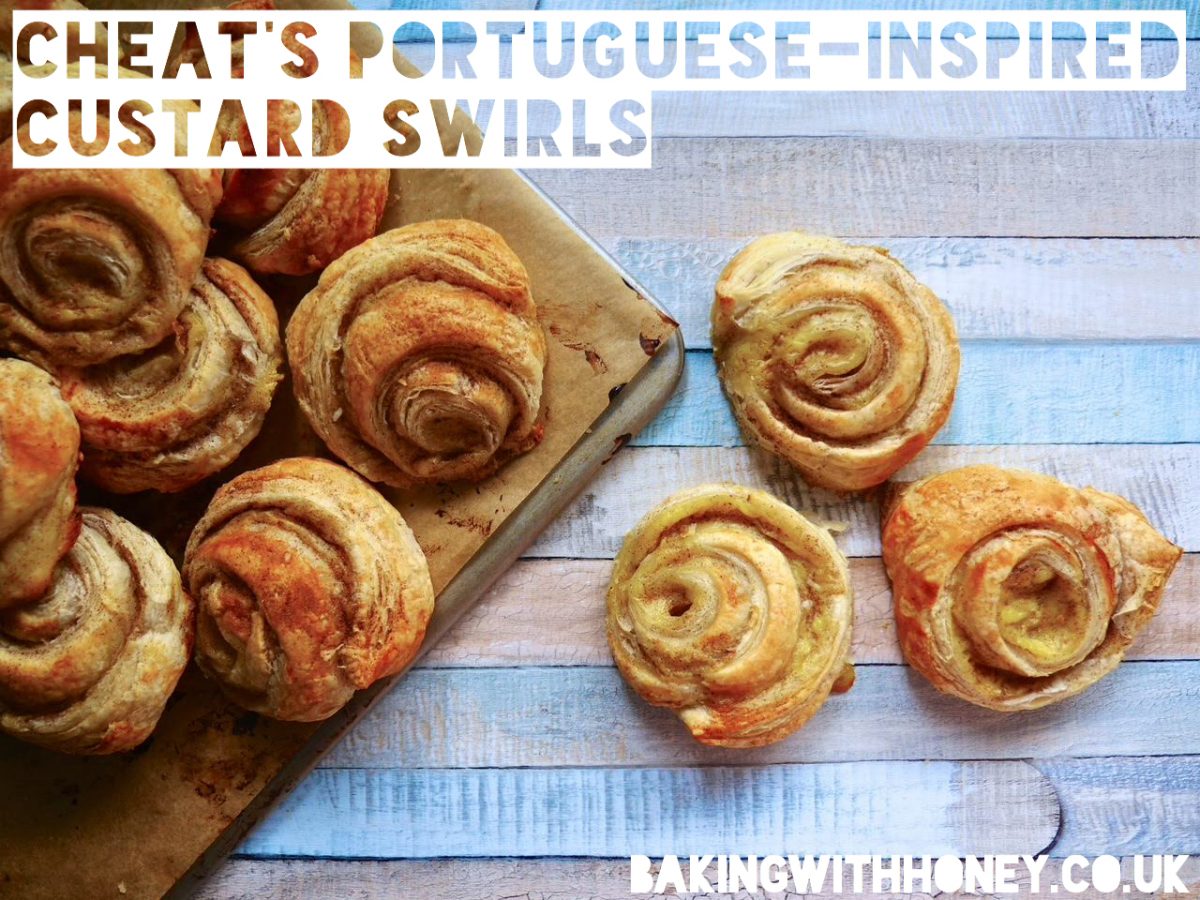 I’m almost embarrassed to share this, as it isn’t really a recipe at all. Created in the spirit of Eurovision – this year held in Lisbon and on the tellybox tonight – this is a thrifty three-ingredient, no-effort and strictly tongue-in-cheek homage to the famous Portuguese custard tarts (similar to British ones – they use puff pastry instead of sweet shortcrust and the custard is scented with cinnamon instead of nutmeg). This recipe is such a cheat I feel it’s necessary to mention that my previous attempts at Eurovision bakes were much more substantial and have included (ahem) Bondepig Med Slør (Copenhagen 2014) and the utterly divine Prinsesstårta (Sweden 2016 – I really must have a go at veganising that!)

This recipe actually started out a couple of months ago and was a completely legitimate attempt at Portuguese custard tarts. I came up with a very nice homemade custard filling, but after about three hundred attempts at blind-baking puff pastry to make the shells, I gave up (why does it shrink so?) and eventually spread the custard over a sheet of ready-made puff pastry instead. What followed was your standard pastry swirls (or whirls?!) – and very nice they are too, particularly with a super strong black coffee, if that’s your thing; I know it’s mine.

I highly recommend that you purchase both the puff pastry (ready rolled to boot – in for a penny, in for pound) and the custard. (I used a carton of Alpro custard). The custard generally comes in a 500ml carton – this will cover two sheets of puff pastry, so remember to buy two if you want to make that many! Yes, these pastries are completely inauthentic. Also quite silly (a bit like Eurovision). But they are fast to make, taste great and I guarantee you won’t be turned away from a Eurovision party with a Tupperware full of these tucked under your arm. 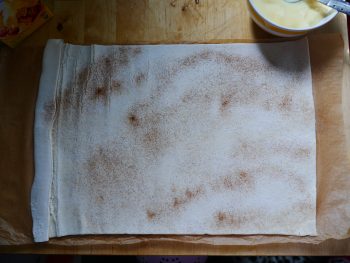 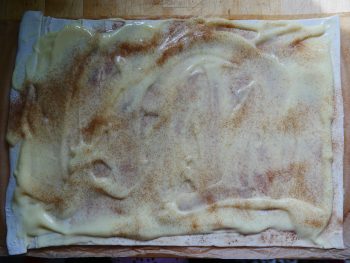 Gently unroll the pastry, keeping it on the paper it was wrapped in. If the last bit is hard to unfurl, just press it or roll it a bit to smooth it out. Sprinkle cinnamon all over, plus a tablespoon or two of caster sugar if you prefer sweeter pastries, then spread the custard all over. Try to leave about a centimetre gap around the edges (although this is fairly messy no matter what you do, so don’t worry about it). Dust again with cinnamon. 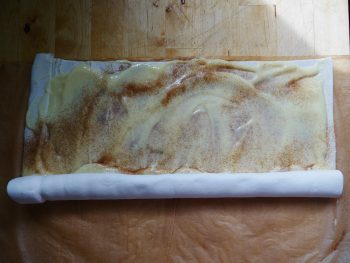 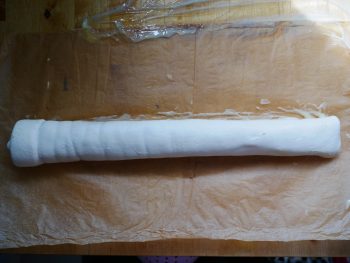 Very gently, and not too tightly, start rolling the pastry up. Start at the longest side closest to you (as shown above). As you reach the end you’ll probably see a bit of custard oozing out. Just wipe it away and seal the edge as best you can (you won’t need milk – it’s covered in custard!). Position the roll so that the join is underneath and pop it in the freezer for about an hour. This bit is essential because otherwise they will just squish when you try to slice them. 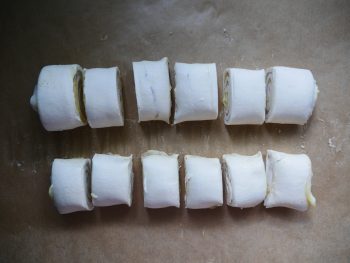 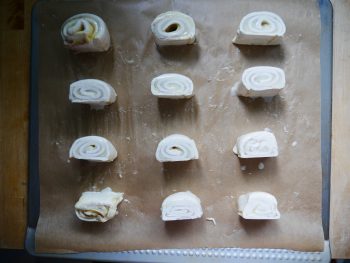 Preheat the oven to 200c/400f/gas mark 6. Slice the roll in half, then slice each half into 6 or 7 pieces, so that you end up with 12-14. As you can see I made 12, but some were quite bulky and I think I could have got 14 altogether. Arrange them on a very large, lined baking sheet (or bake in two batches). Place them so that the neatest side is facing upwards and make sure you allow lots of space for spread! Brush with a  little non-dairy milk and bake for around 20-25 minutes, or until they look golden and properly puffed out. 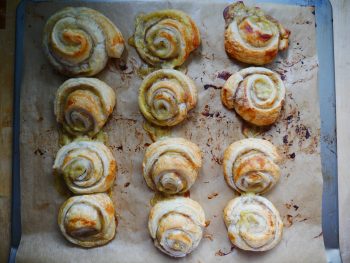 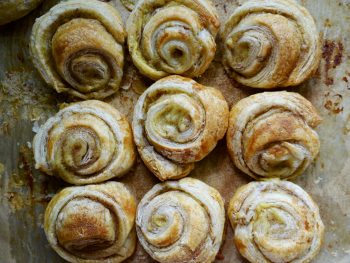 As soon as they’re out of the oven, sprinkle with a little more cinnamon (and caster sugar if you like.) Allow to cool completely then store in a tub in the fridge. These are best eaten as soon as possible (or within 24 hours) as they do tend to go quite soft due to the moisture from the custard. 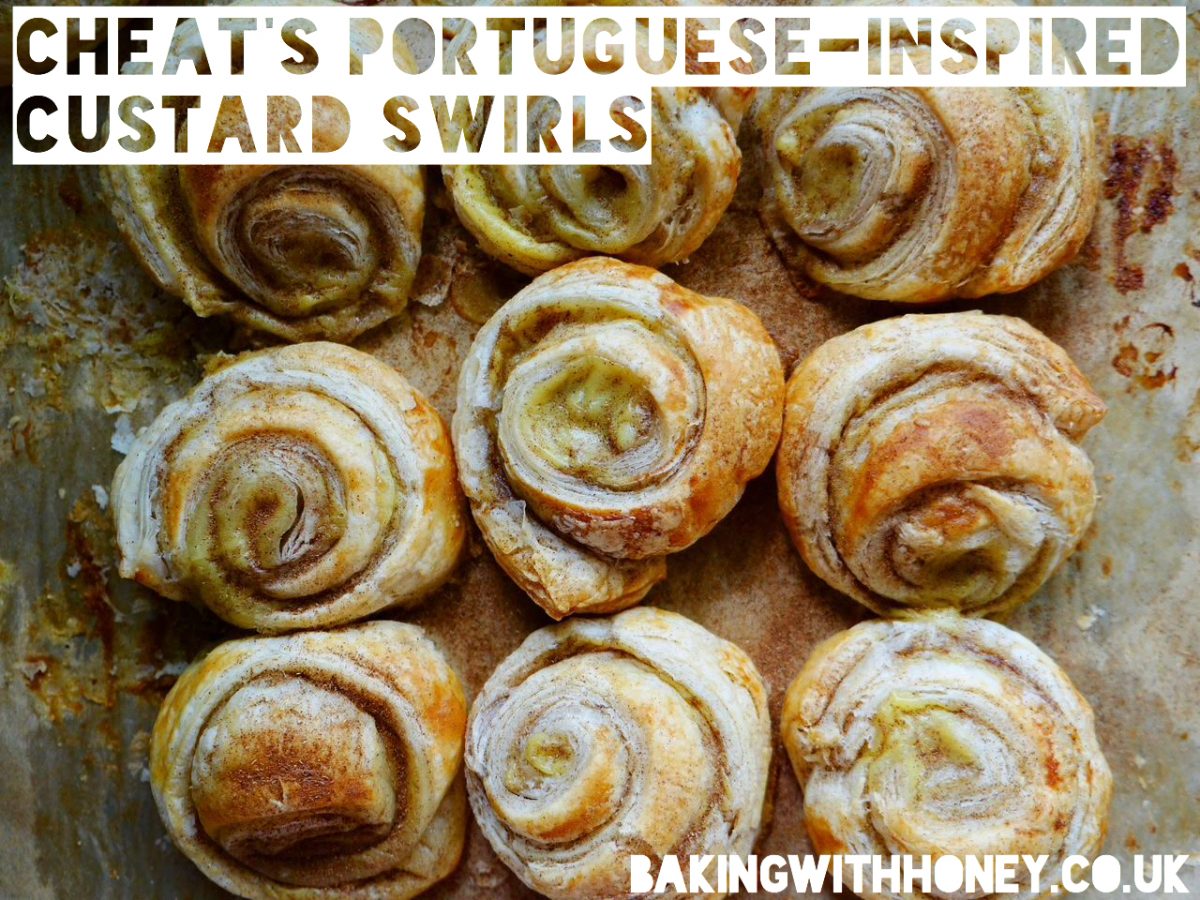