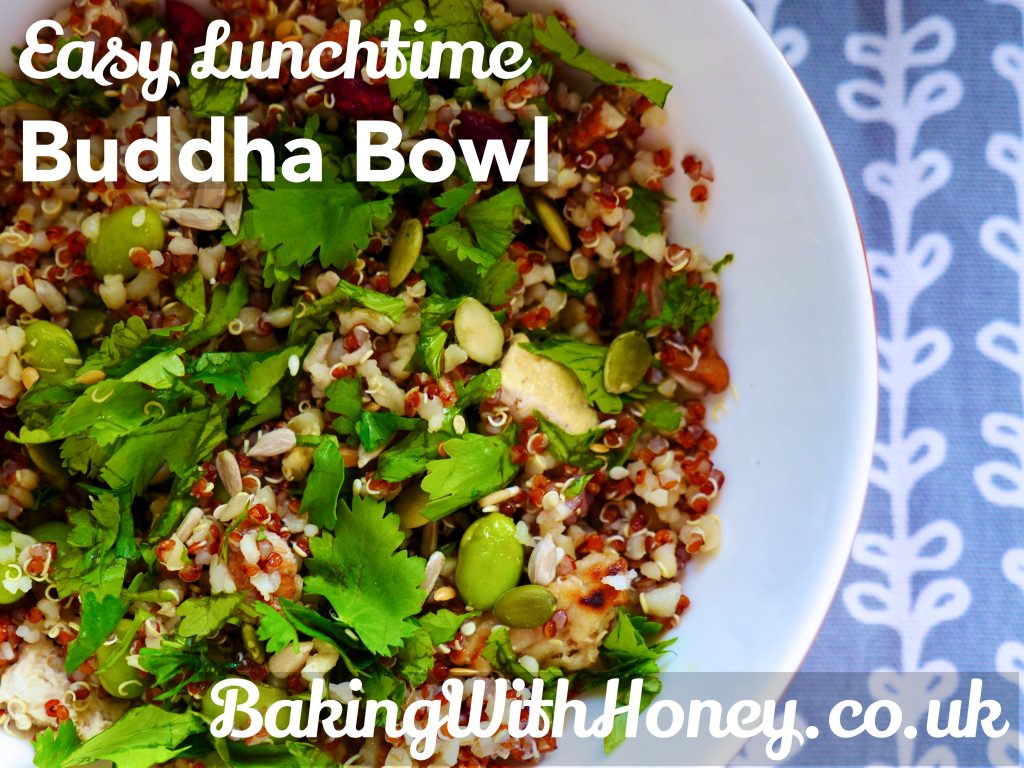 I am not a huge fan of a weekday lunch. By which I mean, I am not a huge fan of a solo lunch, as my husband is usually either working or sleeping (big thumbs down for random shift patterns) and my daughter is at school. I don’t really enjoy going to the trouble of preparing and cooking something every day just for myself, so I have been known to settle for a bowl of cereal, toast or even a Cup-A-Soup. But then I got started on these Buddha Bowls. Sometimes called Hippie Bowls or Glory Bowls, these superfood lunches have been popular in niche (i.e. vegan) Western cultures since the 60s (and a staple, in various forms, for the rest of the world roughly since forever). It is basically a highly nutritious, balanced combination of grains, greens and protein which is then – you’ve guessed it – mixed up in a bowl. I’m assuming so you can balance it in one hand and eat it on a yoga mat with your legs crossed in a zen-like fashion. Just kidding.

This does involve initial cooking (i.e. boiling some grains) but I make a big batch and that’s 3-4 lunches sorted with ease. When you want to eat, you scoop out a cupful of the mixture, top it with freshly chopped herbs (plus sliced avocado if you’re being fancy) and dig in. Also, you definitely don’t need to follow all the ingredients to the letter. This is just the combination that I really like, but I’d stick to the quinoa and bulgar wheat base if I were you (although short grain brown rice also works really well here). Other than that you can change up the ingredients as you please and build your own idea of a perfect bowl; Just keep the quantities roughly the same of each food group and you can’t go wrong.  I don’t need to sing the praises of quinoa (complete amino profile, food of the Aztec gods etc) as it’s plastered everywhere. Yes, I know quinoa ‘doesn’t taste of anything’. Neither does rice. Or pasta. We make them tasty by flavouring them – let’s apply the same principle to quinoa and embrace the goodness!

This makes 3-4 lunch bowls, depending on appetite. I use a 1-cup measurement for a portion and I get four lunches out of this. If possible, serve on a salad base (I usually keep rocket in the fridge).

Using a fine mesh sieve, thoroughly rinse the quinoa and bulgar wheat in cold water. Place in a saucepan and add approximately 600ml cold water. Bring to the boil, stir gently then reduce the heat a little and simmer for 15 minutes, partially covered by a lid. After this time, turn off the heat and allow to stand for 5 minutes, then rinse and drain. Transfer to a mixing bowl.

Meanwhile, fry the Quorn/Fry’s/tofu until cooked and golden. If using a frozen product, cook on high in the microwave for a minute or two first then fry until golden. Add to the bowl of cooked grains along with the edamame, raisins, seeds, spring onions and nuts. Stir to combine.

Stir the dressing ingredients together and sprinkle into the bowl. Stir until everything is mixed and serve on a green salad, if you like, and add a handful of roughly chopped coriander. Store leftovers in an airtight tub in the fridge for 3-4 days.