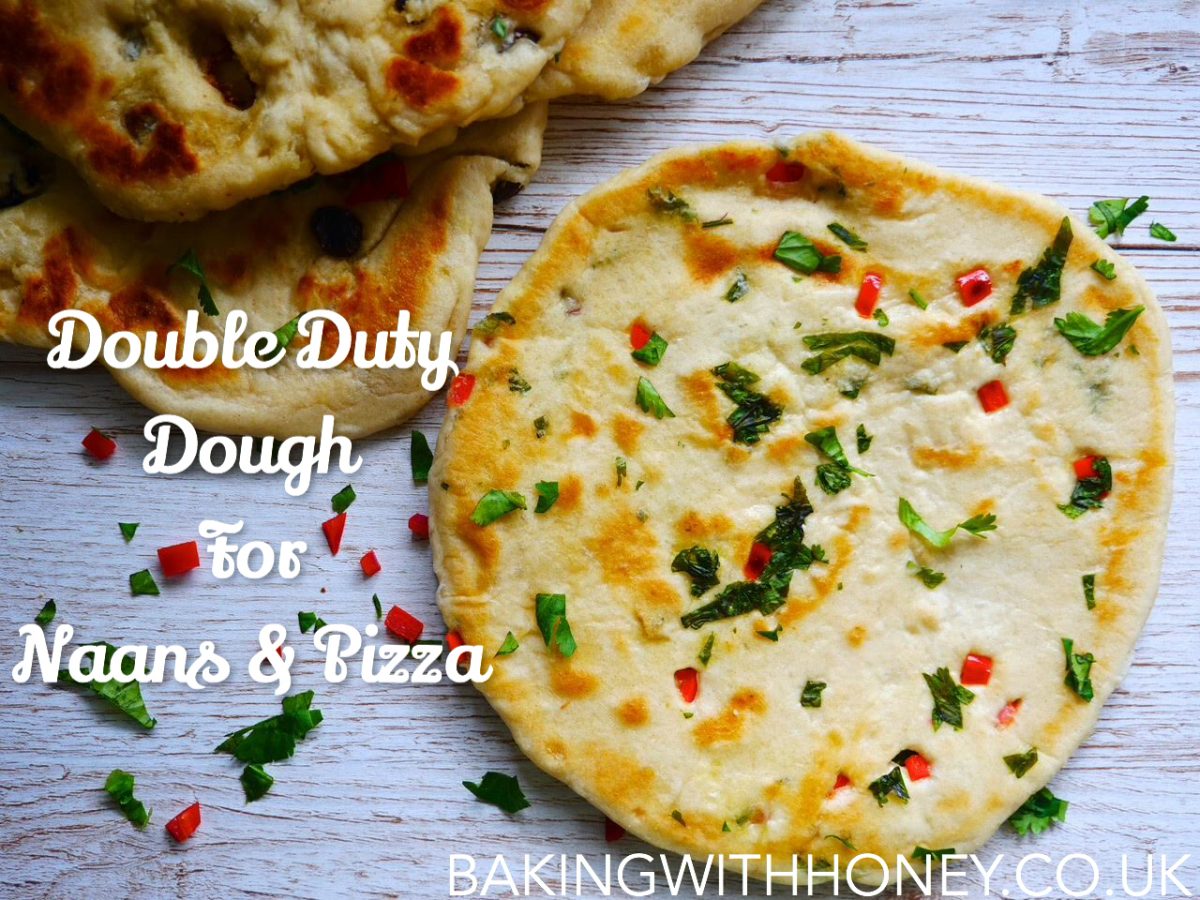 Who doesn’t love freshly made bread? Nothing beats it, but I know a lot of people are a bit nervous about having a go at home. If you’ve never made any kind of bread before, this is a great recipe to start with. And if you’re vegan, I’m pretty confident you’ll want to make this again and again! This easy recipe will give you hot and fluffy flavoursome naans, plain flatbreads or a glorious pizza base faster than it takes you to return sad-faced and empty handed from a supermarket. Certainly, vegan naan bread is near impossible to find, and if you do manage to locate it (I did, once) you’ll be sorely disappointed. Unless you like garlicky polystyrene. It was this kind of disappointment that pushed me into simply making my own versions at home, and I’m really glad that I did! I’ve made my own bread on and off for about fifteen years, as and when the fancy takes me; but lately I have found myself making pizza bases or naan bread on almost a weekly basis and nothing you can buy in the supermarket (if you can find it, obviously) comes close. When you realise just how simple it is – and how fun it is to experiment with different flavours – you’ll wonder why you ever bought them, and hopefully you’ll really enjoy the process, too.

This is based on a simple bread dough, which is itself kind of magical. The way you shape, flavour and cook the dough is what makes it unique. The basic formula can provide you with any kind of bread (in particular you could make pittas with this if you put them in the oven) but here I will focus on naans and pizza bases and share with you my preferred method for cooking them (it’s a frying pan, kids – don’t panic) which I have found gives the best results achievable at home short of installing a tandoor oven.

Admittedly, traditional naans tend to be enriched with dairy, which helps achieve a soft result. You could replace the water in this recipe with non-dairy milk or half yogurt/water if you like, but I never do – I think the addition of oil is enough to help keep the bread soft. So my versions are by no means authentic (whatever that is) but they are fluffy, hot and tasty and rather beautiful in their funny homemade irregularity. They are perfect for mopping up your favourite curry – especially my all time favourite, chana masala – chickpea curry). And when it comes to pizza – children love getting involved (keep them away from the hot pan, obviously!). Honey enjoys helping me roll the dough and likes sprinkling chopped peppers, corn and peas (don’t ask) on hers!

You can keep the dough plain or knead in some flavourings after it has rested. If I’m making naans, I tend to to divide the dough in two after it has rested and make two garlic, chilli and coriander naans for myself and my husband and two plain or peshwari style, which suits my daughter better. Here are some suggestions but you can play with this recipe and come up with your very own versions! Quantities show are roughly what I’d use per naan:

Per naan, to be kneaded in after the dough has rested:

Peshwari: Make a paste with 2 tbsp desiccated coconut, 1 tbsp caster sugar and 1 tbsp vegan butter or coconut oil. Add 1-2 tbsp sultanas (or raisins if that’s what you’ve got!). You can either knead the ingredients into the dough, which can be a bit messy – or roll out the dough into a disc and spoon the paste into the centre. Fold the dough in half (half moon shape), squash it down a bit and cook; so you end up with a sweet filling. After cooking, sesame seeds sprinkled on top taste fantastic if you’ve got them.

Onion: Allow a handful of onion per naan, gently fried until very soft and translucent. Spring onions are great too (I’ve always got some that need using up!)

I usually leave pizza bases plain, or maybe add just half a teaspoon of dried Italian mixed herbs per base. I’ll leave the toppings up to you – you know what you like on your pizza and how much. Since going vegan we’ve learnt to love pizza with no cheese (non-dairy or otherwise) and instead we enjoy topping a simple passata base (just a tablespoon or two per pizza is plenty) with things like caramelised red onions, sun-dried tomatoes, pesto, sliced peppers, even dollops of hummus. Not all at the same time, obviously…! 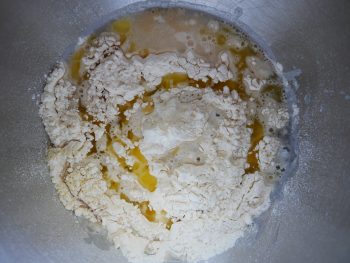 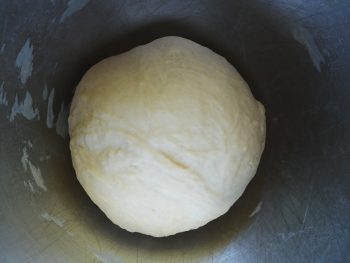 Place the flour, salt, yeast, water and oil in your food mixer bowl. Knead using the dough hook for at least six minutes until you have a smooth and silky ball. If kneading by hand, bring the ingredients together (I find it easier to use my hand rather than a wooden spoon) and knead. Avoid adding too much flour while kneading. You shouldn’t really need to; this isn’t a sticky dough and should come together pretty cleanly. You’ll need to stretch and knead for around ten minutes until you get a dough that is smooth to the touch. When it’s done, form a ball and place in an oiled bowl (I just reuse the Kitchen Aid bowl) and cover with clingfilm or a plastic shower cap. (I can’t remember when I first heard this tip but it’s frankly genius). Leave in a reasonably warm place – like an airing cupboard – for 1-2 hours (longer if it suits) until at least doubled. Or leave overnight in the fridge or a cool place if you want to prepare the dough the night before. 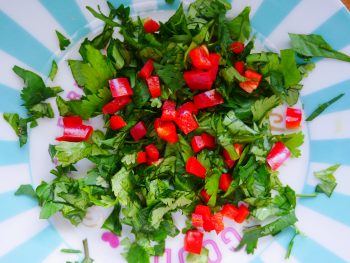 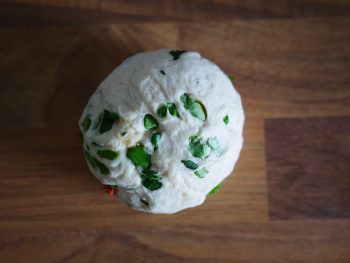 When you’re ready to cook, you can get together your fillings if using (see the suggestions above). Divide the dough into four equal balls (if you’re a bit obsessive like I am, you might like to know each one will weigh about 110g). Add the fillings as described above and knead. Form a ball, sprinkle some flour on a surface then use your hands to flatten and stretch (this is best for naans, it gives you a nice bumpy-looking finish) or use a rolling pin for pizza bases. Aim for circles about 7″ diameter or oval/teardrop shape if you prefer. Flatbreads don’t really need proving, but they do benefit from a few minutes’ grace after rolling, if possible. 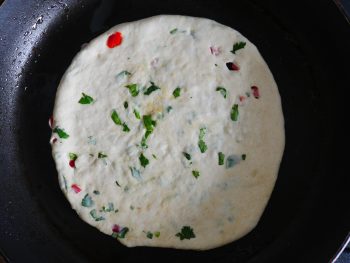 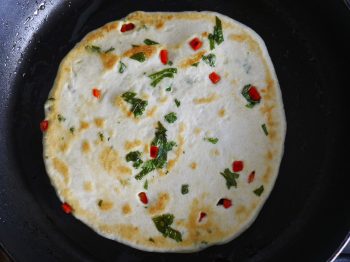 Cooking naan: Heat a large heavy frying pan (I use a non-stick one) on a medium-high heat. Add a generous slug of oil (I use coconut oil if I’m making peshwari naan). Gently place the rolled out bread into the pan and fry for around 3 minutes both sides, or until you see patches of deep gold. Transfer to a plate and keep covered (place another, inverted plate on top or use a tea towel) as the steam will help keep the bread soft.

Cooking pizza: Cook as above but cook the second side for just one minute. Flip it over again (so the less-cooked side is upwards) and transfer it to a pizza tray or baking sheet. Add your toppings and place under a hot grill (or in a hot oven) for a few minutes or until done. 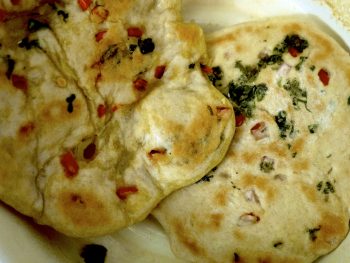 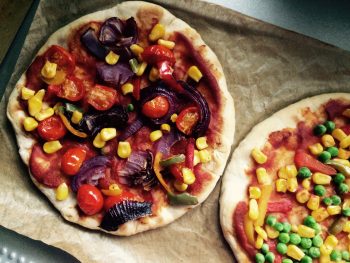