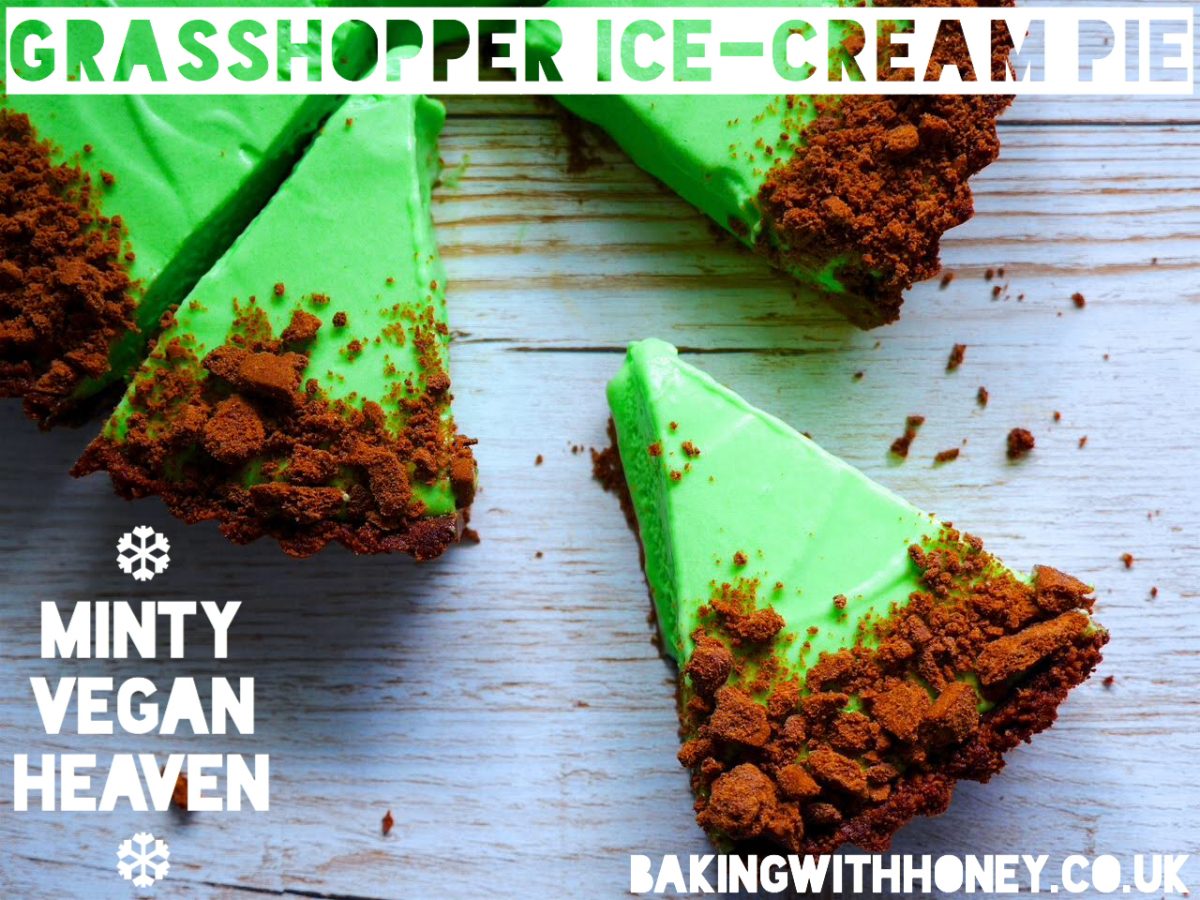 How’s your summer going? Has it been hot enough for you? I wasn’t around for The Famous Summer Of 1976 so I can’t recall a summer quite like this year’s other than 1995, which I remember reasonably well as my poor mother was very pregnant with my sister and spent a good couple of months surviving on cider ice lollies (you know, the ones that never contained any actual cider) while resting her swollen feet in the freezer. As for me, I am a winter baby and I go to pieces in warm weather – so I confess I was literally daydreaming about the day when things cooled down a bit. So although this chilled, no-bake treat is being posted with spectacularly poor timing amidst grey skies and thundery showers, it was a godsend during the hottest period.

I’m really proud of this pie! It’s a deliciously happy accident after many attempts at veganising my own Grasshopper Pie, which was my vegetarian version of the classic Grasshopper Pie – as the original recipes use marshmallows, which contain gelatine and are not veggie friendly. I solved the problem using a jar of Marshmallow Fluff instead of marshmallows. Creating a vegan version required a bit more effort. Vegan marshmallows taste amazing but the bags are both small and outrageously expensive – this just didn’t appeal. And then I discovered aquafaba.

Aquafaba is simply the leftover (drained) chickpea water from a can of unsalted chickpeas – and the amazing things you can do with it! Someone somewhere (I believe it was a French chef but don’t quote me on that) noticed how chickpea juice resembled egg whites and decided to see what would happen if it was whisked up with sugar. As the result of some scientific miracle, it produces an enormous voluminous mass of perfect, fluffy white meringue. It’s quite unbelievable to say the least! Brilliant and wondrous and so very exciting for vegans and also those with egg allergies. The use of aquafaba is still in its infancy but I think this natural by-product which is normally discarded is set to be used in many, many ways in the coming years. I’ve been enjoying experimenting with aquafaba for just over a year now – I can make a very good meringue! (And no it doesn’t taste like chickpeas.)

To cut a long story short, I noticed that the freshly-whipped, uncooked aquafaba meringue resembled – both in taste and texture – those jars of Marshmallow Fluff I was so fond of using for my old grasshopper pie. I decided to have another go at a vegan pie and this is what I came up with. Obviously there are other elements to this pie that aren’t in the original (blended cashews and coconut oil help to provide creaminess and structure) but the overall taste is one of familiar, nostalgic minty bliss. The pie didn’t set as firm as I would have liked so I put it in the freezer – but happily it slices easily almost immediately after removing from the freezer (I slice mine into ten pieces and transfer them to a ziplock bag) and is edible within minutes. I suspect the aquafaba prevents it from freezing into an iceberg that takes hours to defrost – it just stays creamy. I will definitely be using aquafaba in all kinds of vegan ice-cream situations in the very near future! Meanwhile, this is pretty much like the best chocolate peppermint ice cream you ever had, in pie form.

250g bourbon biscuits (most are vegan, check the label) plus an extra few biscuits for decorating
75g Stork (the foil-wrapped one, or any vegan butter), melted 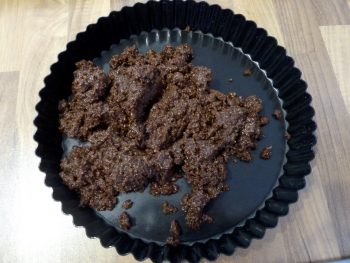 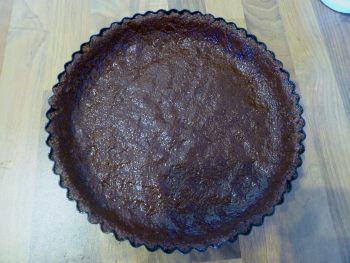 For the biscuit crust, simply blitz the bourbons until sandy in texture. Switch the motor off then add the melted butter and run it again until it the mixture clumps together. Scrape into your tin and use the back of a spoon to smooth evenly over the base and up the sides. Pop it in the fridge or the freezer to set while you get on with the filling. 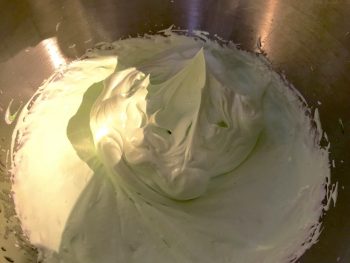 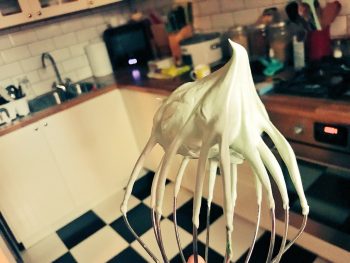 For the aquafaba meringue: Place the aquafaba (that’s the chickpea water), sugar, cream of tartar and the green food colouring (if using) into a mixer bowl and whisk using a balloon whisk (electric!) for around ten minutes on a very high speed. I use earplugs when my Kitchen Aid is used in this way – you might want to do the same!
Stop whisking when the aquafaba meringue looks thick and can stand in peaks. Set it aside for a moment.

Next, process the cashews, water and creme de menthe (or peppermint oil) on the highest setting until completely smooth, then add the vanilla and coconut oil and briefly blitz again. A small, high speed processor/blender is best for this. I use a mini jug for my Vitamix; a nutribullet or similar works well too. If you’re not too sure, soak the cashews in freshly boiled water for an hour before draining and using as above. The soaking really softens the cashews and makes them easier to blend. When the mixture looks smooth and creamy, fold it into the waiting aquafaba meringue. This bit is a bit tricky to do without the meringue collapsing, but don’t worry too much about that – just make sure it’s all evenly combined. It doesn’t seem to affect the final outcome.

Spoon the mixture into the chocolate crust and place in the freezer. After about an hour, crush a few extra bourbon biscuits and sprinkle around the edge of the pie then return on the freezer until firm. When it feels solid, remove from the tin, slice and serve. I like to slice into ten pieces then keep them in the freezer for impromptu desserts – it’s ready to eat within minutes so don’t be tempted to remove too early as it will soften too much. 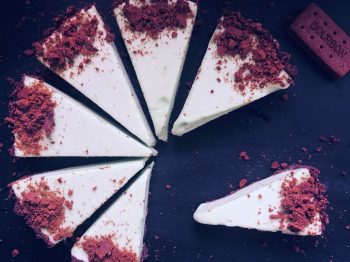 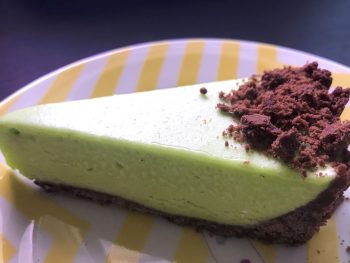