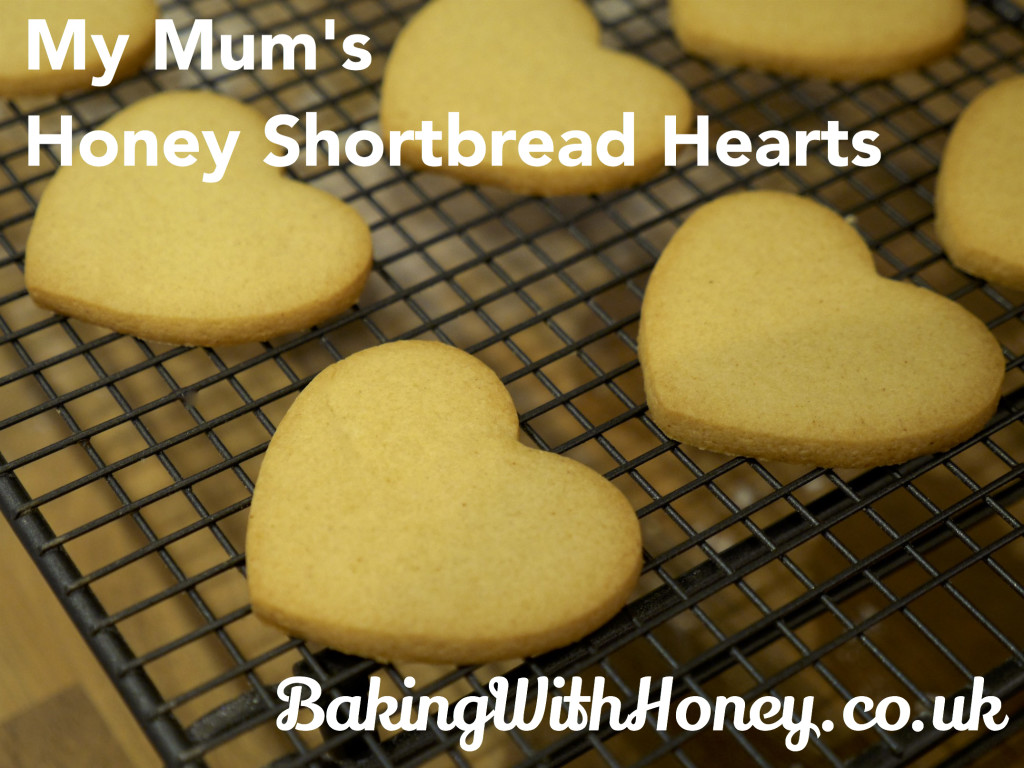 Traditional shortbread is a delicious, not-too-taxing treat – and the gorgeous honey flavour here is a yummy twist on this old classic. This is an absolute doddle to make and a great one to make with children – they love cutting out shapes with their favourite biscuit cutters! This recipe was given to me by my mother, who has been making it, with varying degrees of success, since I was about eight. I must confess I have tweaked it just a little.

My mother’s recipe contained 175g – that’s 6 ounces in old money – of flour. My version replaces two ounces of the flour with an ounce each of cornflour and semolina, both of which are textbook standard ingredients for melt-in-the-mouth shortbread with a good ‘snap’. If you don’t have either cornflour or semolina in your cupboard then just use plain flour. I have also adjusted the method; the original recipe advises rubbing the butter into the flour to begin. I advise creaming the butter and sugar together to begin with as this definitely results in a lighter biscuit. I’ve also added a pinch of salt – this just brings out the full-bodied flavour of the honey. At this point my Mum will claim this isn’t her recipe at all. It is, just ever so slightly improved.

I recommend using a really good, strong honey for this – as the flavour comes through with a lot more oomph. Set honey is best, but last time I made this I used a mixture of set New Zealand Manuka honey and regular runny honey as that is what I had. It turned out just fine. My Mum also says golden syrup is fabulous as a change from honey, although I haven’t tried this yet.

This recipe doesn’t make a huge amount, but you can easily double the quantities as you please. I like to cut these using a heart shaped biscuit cutter, but if you are less kitsch, by all means just use a plain round cutter… 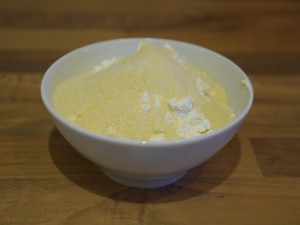 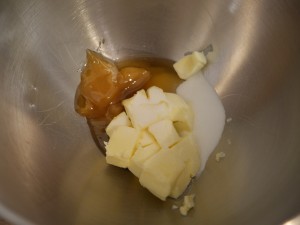 Sift the dry ingredients together into a bowl and set aside. Measure the butter, honey and sugar into your separate mixer bowl. 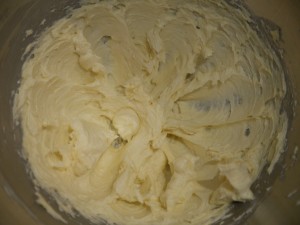 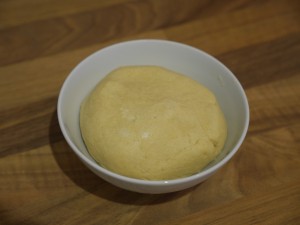 If using a stand mixer, use the paddle attachment. If doing this by hand, roll up your sleeves and get ready to work that wooden spoon. Beat until pale, light and fluffy. I’ve said it before and I’ll say it again – you cannot overbeat at this stage. It’s virtually impossible! So keep going until you have a very fluffy mixture.

Now add the sifted dry ingredients and beat until completely incorporated, but at this stage do not overbeat. Roll it all up into a bowl and flatten into a disc shape. Pop it in a bowl, cover with cling film and let it rest in the fridge for about 20 minutes. 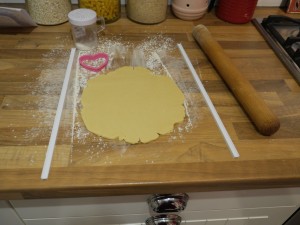 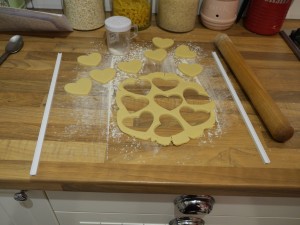 After 20 minutes, take the dough out of the fridge and roll out on to a floured surface. If you’re a pedant like me and want to make sure you are rolling out to an absolutely uniform thickness, you’ll need to buy some marzipan spacers. These ingenious, inexpensive tools are worth their weight in gold and make rolling out biscuits, fondant and marzipan an absolute piece of cake. They essentially act as a ‘height’ on either side of the dough and you roll your rolling pin along them, thus smoothing out your lump of dough and leaving it perfectly even underneath, ready to cut as you please. If you don’t have marzipan spacers you’ll have to do it by eye – you’re aiming for a thickness of around 5mm. It’s quite important to make sure they’re all pretty much the same thickness, as thinner ones will cook faster and be more likely to burn.

Cut out your biscuits and placed them on a baking tray lined with baking paper. Allow a centimetre or two around each biscuit to allow for a little expansion. Depending on the size of your tray, you may need to bake in two batches. Pop the whole thing back in the fridge for about ten minutes. Chilling the biscuits helps stop them spreading as they bake. 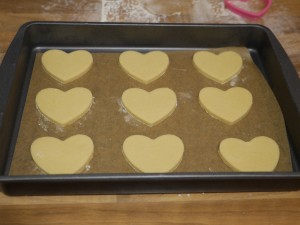 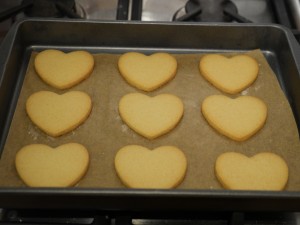 Place the tray in the centre of your preheated oven and bake for 15 minutes. Keep an eye on them, you should remove them as soon as the edges look slightly golden. We all know what shortbread looks like – aim for that! They will appear soft; don’t worry, when they are completely cold they will have a good crunch.

Once they are cold, store in an airtight container. 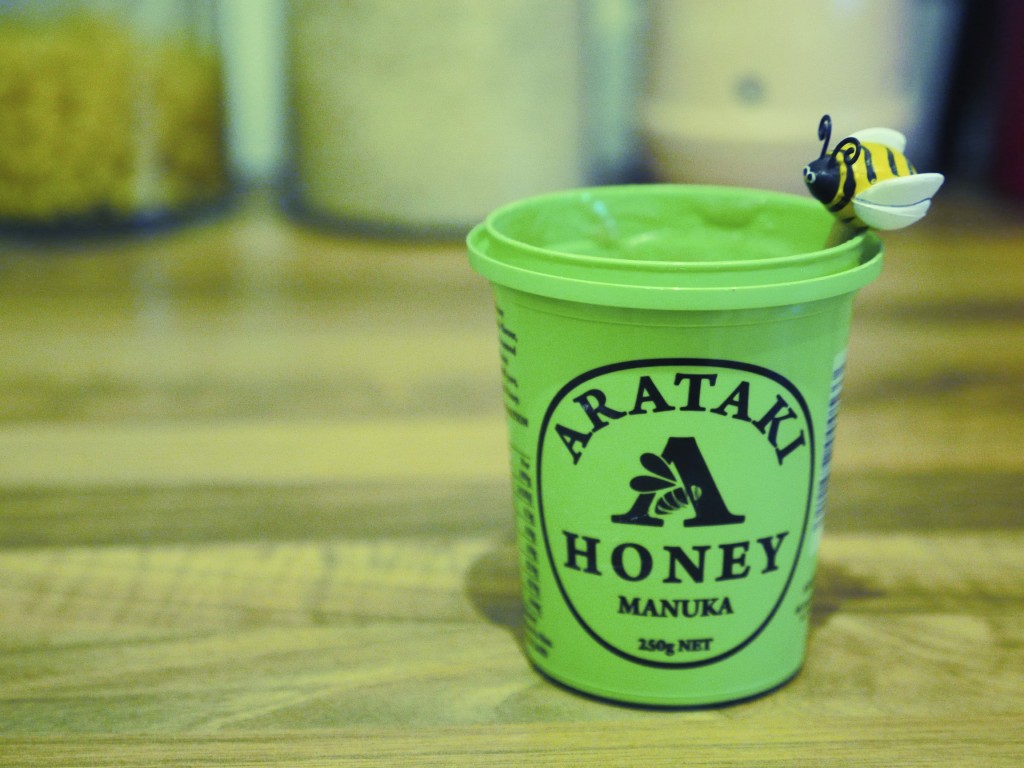