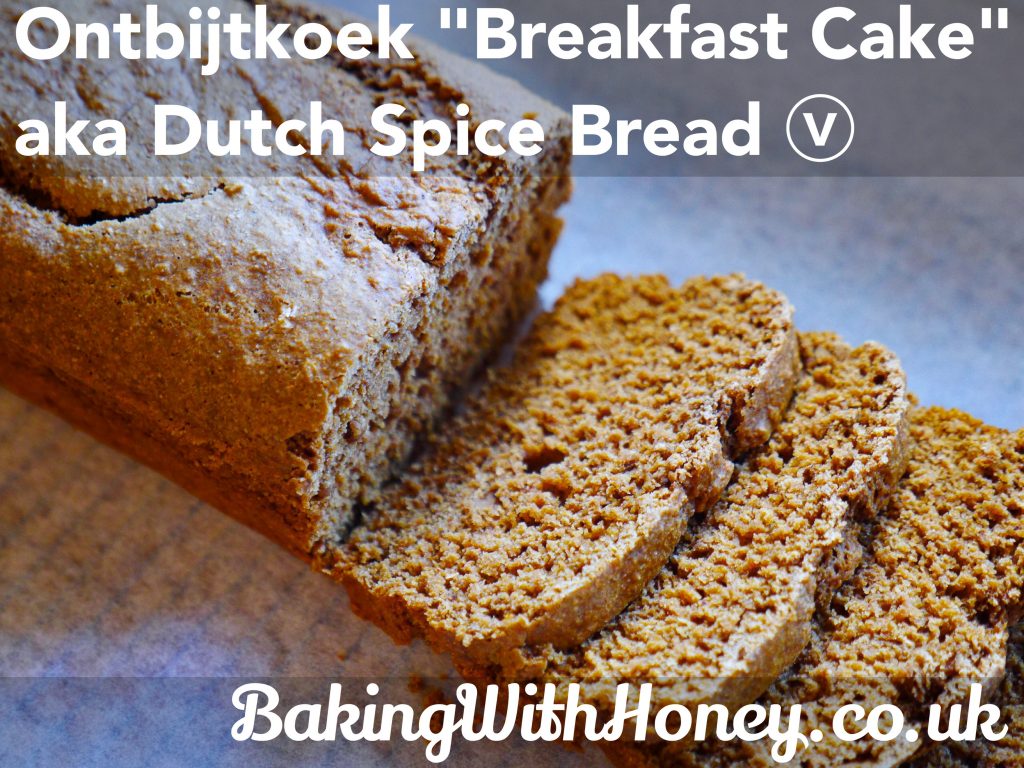 I know we are well into January (ahem, approaching February), and I’m not entirely sure when the cut-off date is, but Happy New Year all the same! Isn’t it cold? London has been thickly coated in frost for what seems like forever, and despite my lazy blogging, I have been keeping warm by feverishly baking and cooking all month – all vegan fare and all delicious. That’s because January hosts ‘Veganuary’ – a movement dedicated to encouraging people to go vegan. It’s snowballing into a worldwide phenomenon as more and more people pledge to embark on a compassionate, plant-based adventure. The number of people who have taken up the challenge has increased year after year; the current estimate for 2017 is well over 50,000 people. That’s a lot of kindness. Even if it’s only for a month, the global impact cannot be underestimated.

My amazing husband has joined me (I didn’t even have to bribe him – what a guy!) and I have rolled up my sleeves and found new ways of cooking for us. During the process I have been generally gobsmacked by all the vegan products out there – whether intentionally vegan, such as the incredible range of non-dairy milks, Fry’s products (including burgers and chicken-style strips) and Sainsbury’s vegan cheeses (which are the best I’ve tried – the plain cream cheese over a bagel is to die for) or ‘accidentally vegan’ such as many breads, crisps, crackers, cereals and biscuits (hello Oreos!). I always thought being vegan would be too difficult, but it’s never been easier. When I first turned vegetarian (almost 21 years ago) there wasn’t anywhere near the vegetarian products there are now. It was sometimes tricky back then but always, always worth it. And now I am starting to feel that way about veganism. Like anything new, it requires a bit of thought and time to adjust before it becomes second nature. I have been ‘almost’ vegan for well over a year, which I think has helped this month’s transition enormously. In 2016 we  made small changes as a family such as dropping cow’s milk entirely (we love oat milk and I regularly make my own organic soy milk) and we switched to a dairy-free spread (Pure or Vitalite) for all our toast and sandwich needs. For baking, Stork (the block kind in the wrapper) is the perfect replacement for butter (I hear ‘Earth Balance’ is the best butter alternative in the US). Small previous adjustments have paved the way to an incredibly easy vegan lifestyle. I suspect my husband will return to a vegetarian diet after January, and although I have no intention of doing so, I think it would be a bit bold to declare myself permanently vegan just yet – but right now, I am. And it feels incredibly good.

Now on to the recipe! As a family we’ve been discussing potential European half-term city-breaks, and Amsterdam (a favourite of mine and my husband) has cropped up a few times. After doing a bit of foodie research (what can I say, I can’t help myself) I discovered that the Dutch are mad about this sweet loaf. Ontbijtkoek literally translates as breakfast cake. It’s plain and wholesome (gotta love that rye), easy to make and oh-so-good toasted, buttered and served with a coffee. It naturally contains no butter or eggs, just milk; which can be replaced with any kind of milk you like. I’ve made it a few times this month and it’s ridiculously easy and absolutely delicious. It’s called ‘breakfast cake’ but we are more likely to enjoy it as a snack, any time of the day. My recipe uses Dutch speculaas spice (I have a recipe here!) but you could easily just use mixed spice. It keeps beautifully for several days – in fact it seems to improve over time – and is just the ticket on these chilly mornings. 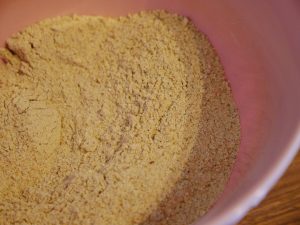 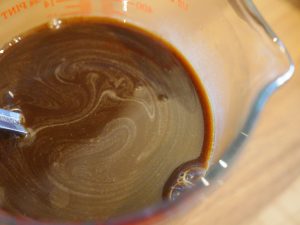 Make sure you preheat the oven first as this recipe, like lots of vegan recipes, is a simple wet and dry mix and takes no time at all! In a mixing bowl, stir together the two flours, baking powder, spices and salt. In a separate jug, gently combine the milk, sugar and treacle. 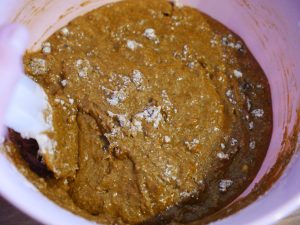 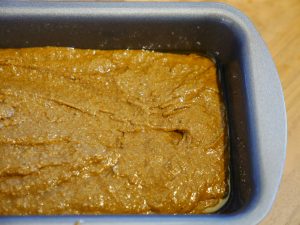 Pour the wet mix into the dry and stir together. I like to use a flexible spatula as it’s easier to scrape down the sides more efficiently. Keep going until all the dry mix has been incorporated, but don’t over mix. When it looks like a relatively smooth, thick batter then you’re good to go. Pour the mixture into the oiled loaf tin and pop it into the oven, on the middle shelf. Bake for about 1 hour. When a cake skewer comes out clean, it’s done. Sticky crumbs are ok, but if there is any trace of runny batter, put it back in the oven and check every 5 minutes. When it’s done, put the tin on a cooling rack. Leave to cool for at least 30 minutes before turning out, then leave it until completely cold. Don’t try to cut it while it’s warm (although it is tempting!) as it will crumble to bits. 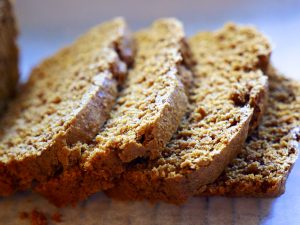 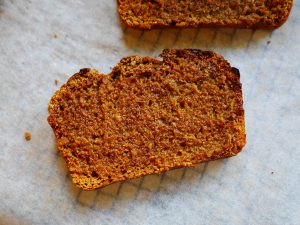 When cold, I like to wrap it in baking paper and store in the bread bin. This loaf cake is best toasted and buttered! It’ll keep for about 5 days. Enjoy! x 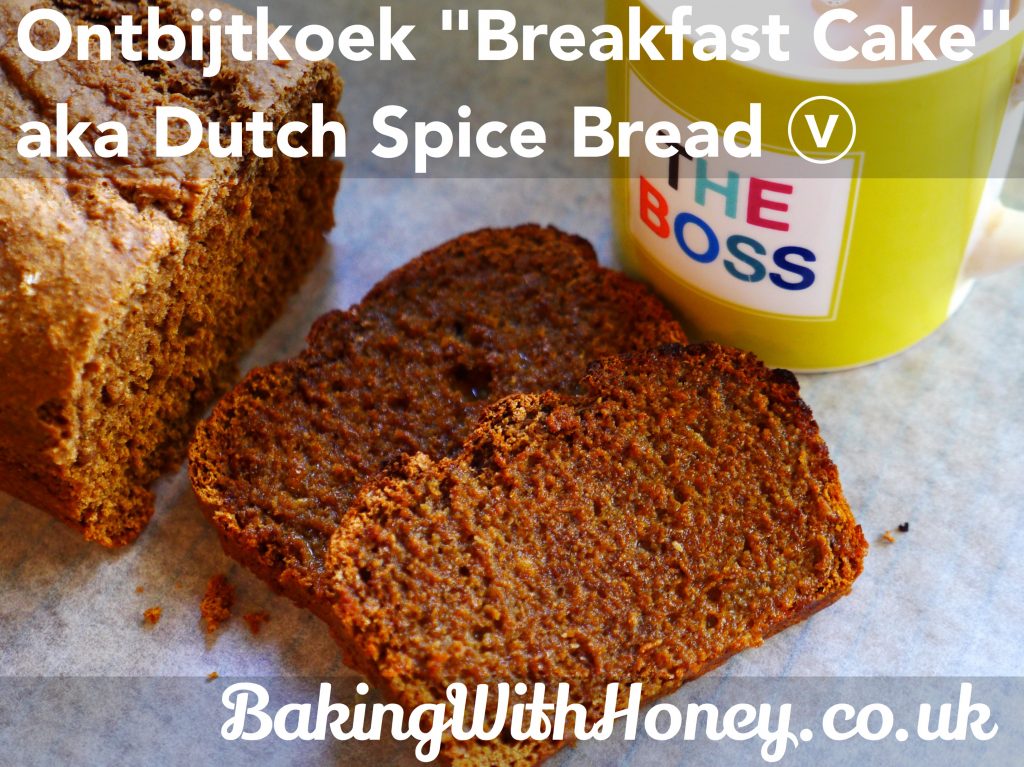