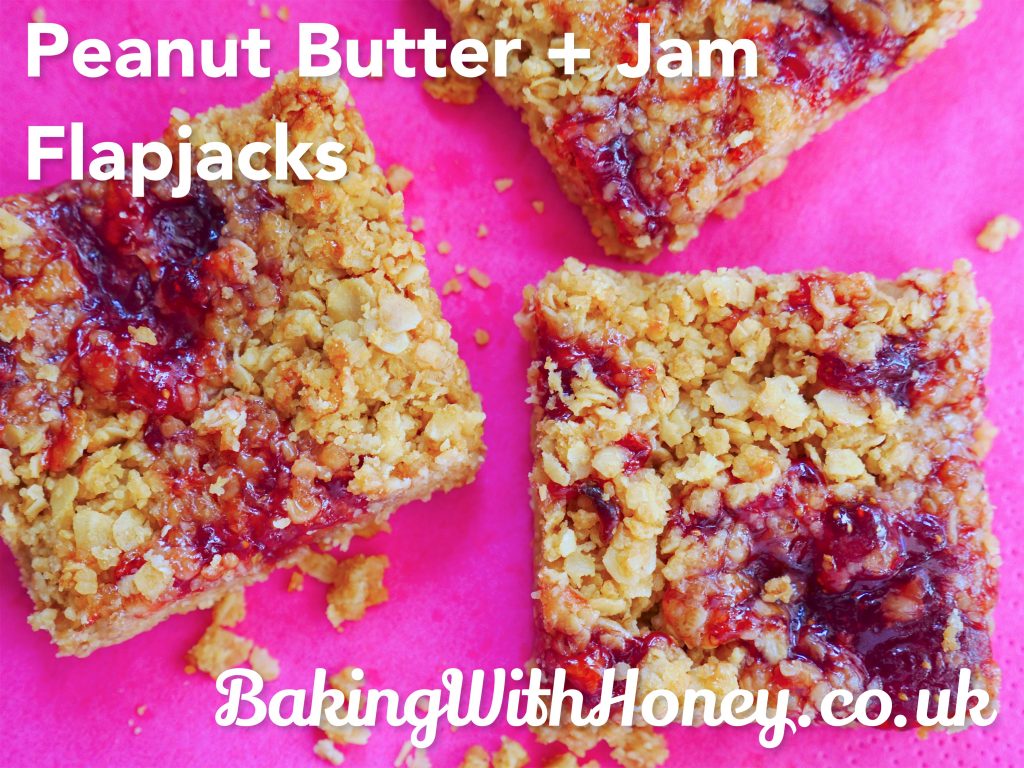 I’m baaaaaack! To cut a long story short, my poor website was hacked to within an inch of its life – and I’m happy to report it’s now back to its usual lovely self. I have missed blogging, despite my trust in t’internet taking a real knock. I’ve also had ample time to consider the future of my blog and I’ve decided to make a few changes in the coming months. Firstly – although this will still be predominantly a recipe-based blog, I’ve decided to include posts about other things I like and things I’m doing; for example little creative projects I am undertaking, day-to-day products I love using (and want to shout about) and other stuff – I believe the popular term is Lifestyle Posts…? Secondly, I am considering (only considering) a change of title for this blog. My daughter will be furious (this blog was named after her, after all) but Baking With Honey poses two problems; as a newly-vegan blog, having ‘honey’ in the title is fairly misleading at first glance. Also, as my fast-growing sweet girl is now six years old (how did that happen?!) baking with her has taken a back seat somewhat as school life and ballet have taken up much of her time. I suppose it’s time for Baking With Honey to grow up a little, too.

In the meantime, hopefully you’ll love this recipe, which I’ve been longing to post but haven’t been able to: Peanut Butter and Jam Flapjacks (or jelly, as they say in America). It’s the sweet’n’salty combo of dreams, although I don’t think it’s ever really found an audience this side of the pond. I first read about peanut butter and jelly sandwiches in a Judy Blume book (I was mad about Judy Blume books as a child – SuperFudge anyone?) and was both fascinated and horrified. Fast forward a decade, you would often find me stuffing jars of grape jelly into my suitcase at the end of a trip to New York after discovering a love of PB&J on toast. Mmmm! Now it’s 2017 and we still don’t have grape jelly in British supermarkets, but I’ve since discovered that peanut butter works equally well with strawberry jam. Or any other berry-based jam really, but strawberry tastes best. I tried the PB&J combination for these easy-peasy (frankly luscious) flapjacks, and they are lip-smackingly good. You can make them vegan as I do, or use a quality butter if you prefer.

I use my trusty 9″x9″ brownie tin for this, but you can use an 8″x8″ tin if that’s what you’ve got – the flapjacks will just be a bit thicker. 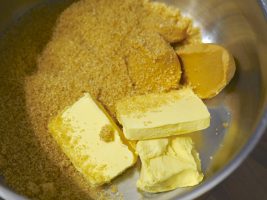 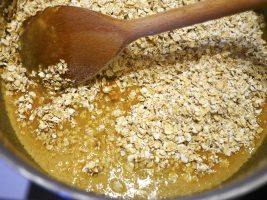 Preheat the oven to 180c/350f/gas mark 4. Place the Stork, peanut butter and sugar in a large saucepan and heat gently, until melted and gloopy. Add the oats. 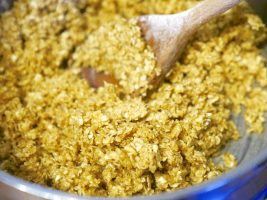 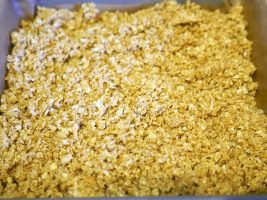 Stir the oats until completely coated (you’ll need a metal or wooden spoon for this – I once snapped a flexible spatula stirring this mixture!) and transfer to a lined brownie tin. Roughly spread the mixture into place, but don’t press it down yet. 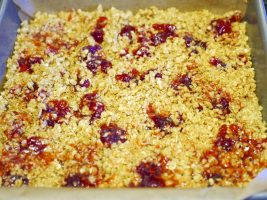 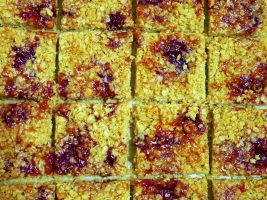 Use a teaspoon make little wells over the surface and fill each one with a dollop of jam. Press the mixture down (using damp hands is best for this, or the back of a spoon) so it’s quite flat. Bake in the middle of a preheated oven for about 20 minutes, until golden brown. Allow to cool in the tin – they will be fragile while still warm. They will firm up as they cool. Store in a tin for a few days.