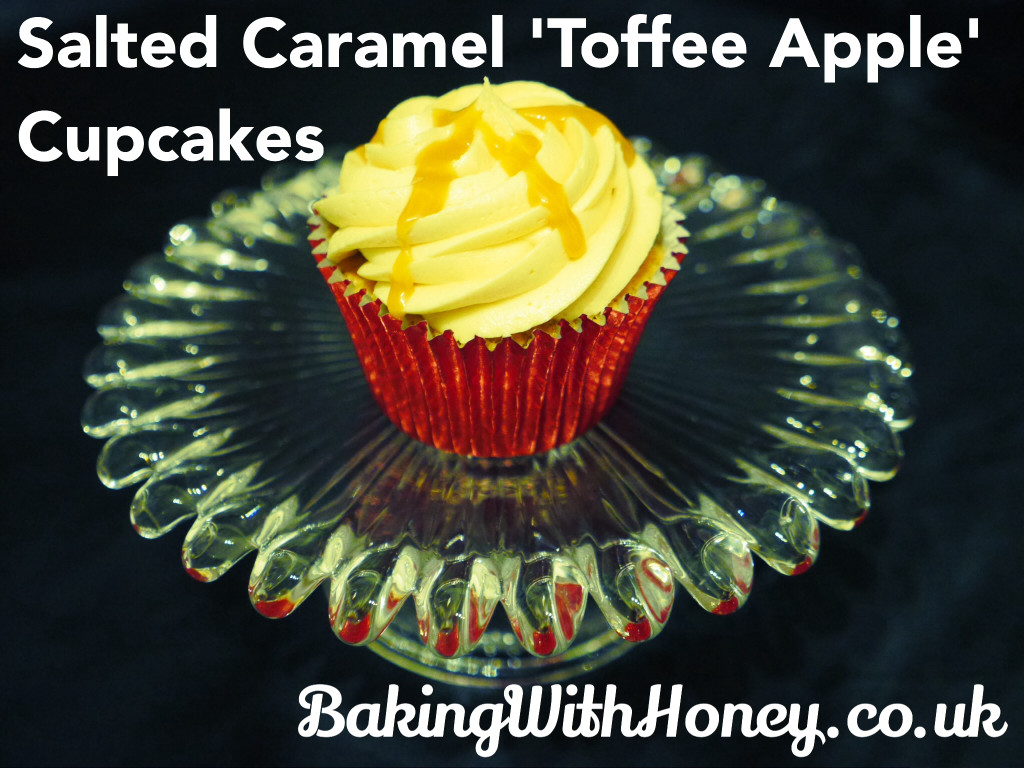 As a complete and utter cupcake fiend, it’s fair to say I’m quite impressed that I’ve managed to hold back on the cupcake recipes for so long. The nearest I’ve come to paper-cased treats on this blog is the humble, nobbly muffin. Sometimes though, a cupcake is what you really want. Cupcakes have the capacity to replace more traditional cakes in almost every occasion – and can be as outrageous, as simple, as colourful as you please. There are squillions of cupcake recipe books out there – this baking fad shows no sign of slowing down! Cupcakes can be flavoured and iced in any way you can possibly imagine – flavours based on classic puddings, sweets and cocktails are particularly popular. If you have a good eye for design, you can also co-ordinate to spectacular effect – some of the most beautiful wedding ‘cakes’ I’ve ever seen are actually stunning cupcake towers. They have the ability to appeal to both young and old, and being a perfectly-portioned, portable treat, they are brilliant at large parties where no-one really wants to be stuck with the cutting knife. Guests can just grab and go – with many even sneaking in a second helping. (So make sure you bake more than you think you need!)

Personally, I can eat salted caramel – in any shape or form – until the cows come home. It is so utterly addictive. If you’re not keen on salted caramel, just use regular caramel. It can generally be found in squeezy bottles in the custard aisle at the supermarket, labelled either ‘caramel’ or ‘toffee’ sauce. I used a jar of Tesco salted caramel for this recipe – but it is also very easy to make your own, if you want to. I’ve been particularly lazy with here; this is essentially a 5/5/5 oz Victoria sponge recipe – with 5 oz of apple added. Nothing groundbreaking, but still delicious (and easy to remember, given the date I had in mind!) For me, toffee apples and autumn go hand in hand, so I thought a toffee apple-inspired cupcake would be a great addition to your Bonfire Night party – or any other autumnal event, of course…

Makes 12 large cupcakes (I use muffin cases). You will need a a 12-hole large cupcake or muffin tin and cases. For the buttercream swirls, you’ll also need a large piping bag fitted with a large star-shaped tip – or just use a palette knife.

For the filling and frosting:
Approximately 250g caramel – unsalted or salted to your taste. (Use sea salt). You’ll need half of the caramel for the filling and half for the buttercream.
200g unsalted butter, softened
300g icing sugar 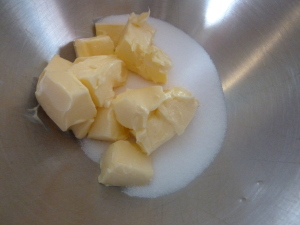 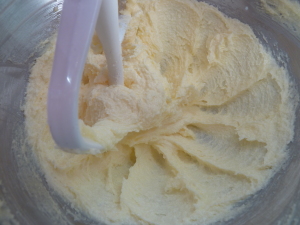 Preheat the oven to 180c/350f/gas mark 4. Coarsely grate the apple and set aside. Don’t do this any further in advance, as the apple will discolour quickly. Cream together the butter and sugar until it is pale, creamy and ultra fluffy. I used a stand mixer for this – it’s impossible to over beat at this stage, so just let it get on with it for several minutes. 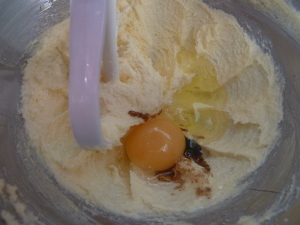 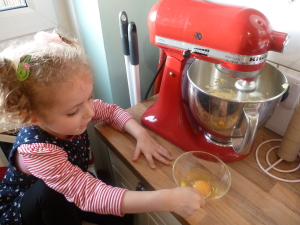 Add the vanilla and the eggs, beating between additions. 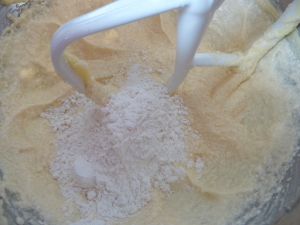 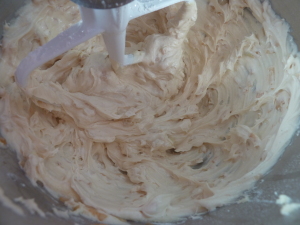 Spoon in the flour while mixing on a very low speed. When it has all been added, turn the mixer up and beat on a higher speed just enough to thoroughly mix, then add the grated apples. 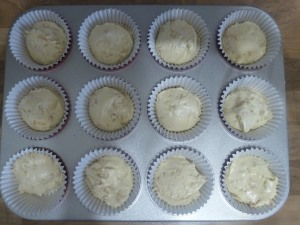 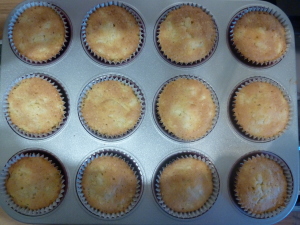 Divide the mixture evenly between 12 large muffin or cupcake cases. Place in the middle of a preheated oven and bake for approximately 25 minutes, until the tops are golden and spring back when lightly pressed. Allow to cool completely before icing. 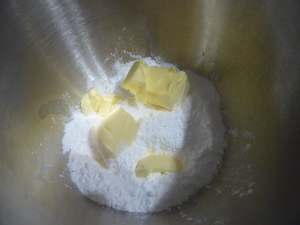 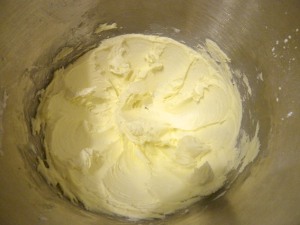 Beat the softened butter with the icing sugar until pale and creamy-looking. Allow at least 4 minutes on high. Scrape down the sides of the bowl as necessary – icing sugar does have a tendency to stick to the bottom! 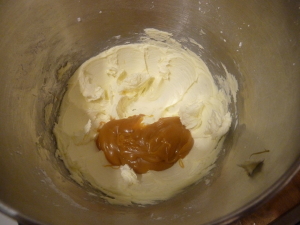 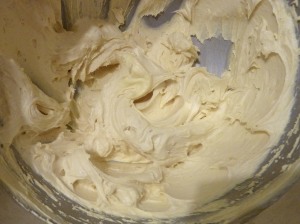 Spoon in 125g of the caramel and beat thoroughly until you have a creamy, pale caramel-coloured buttercream. 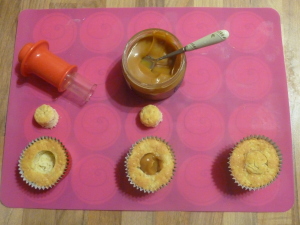 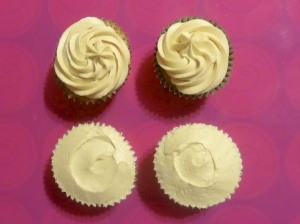 Core each cupcake as shown above. Use a cupcake corer, apple corer, or a small sharp knife to carefully to remove about an inch of sponge from the centres. Using your remaining 125g caramel, spoon about a heaped teaspoon into each centre, then very gently push the circle of sponge back into place. It doesn’t matter if it sticks out a bit, as you’ll be covering it with icing. Keep any remaining caramel for drizzling on top of the cakes later.

Spoon the buttercream into a piping bag fitted with a large star shaped tip, and pipe swirls on each cupcake, or use a palette knife to smooth the buttercream on top as you please. If you have any caramel left, warm it up a little bit and drizzle over the tops of the cupcakes. Keep in an airtight tub and eat within a couple of days – if they last that long! 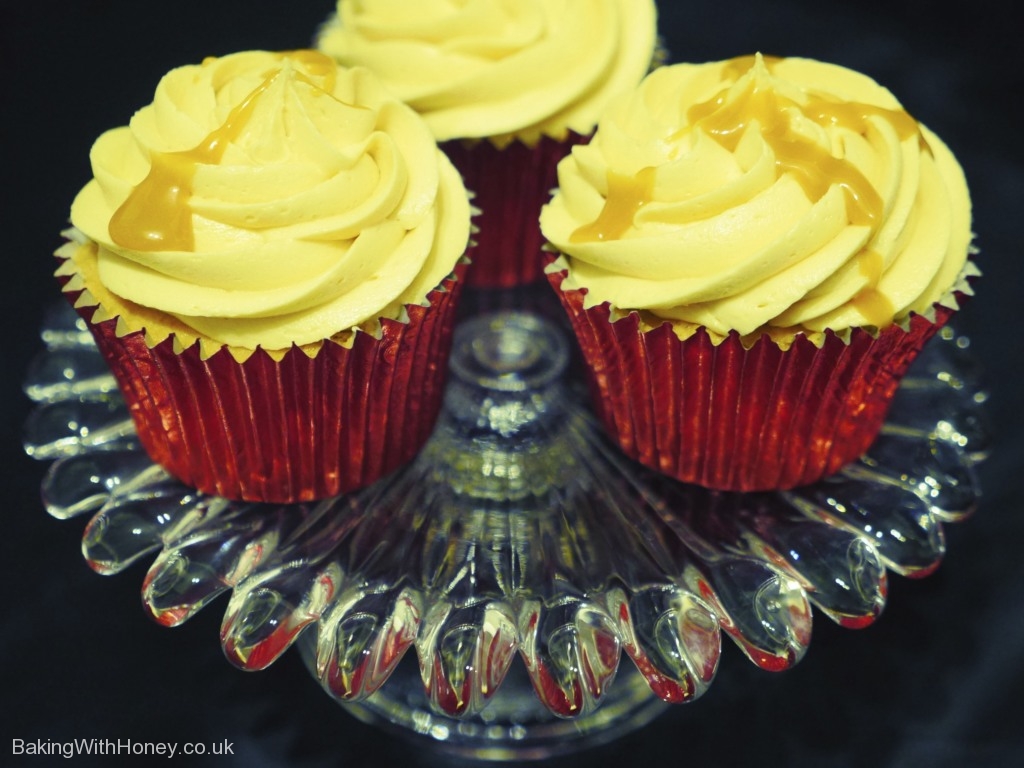