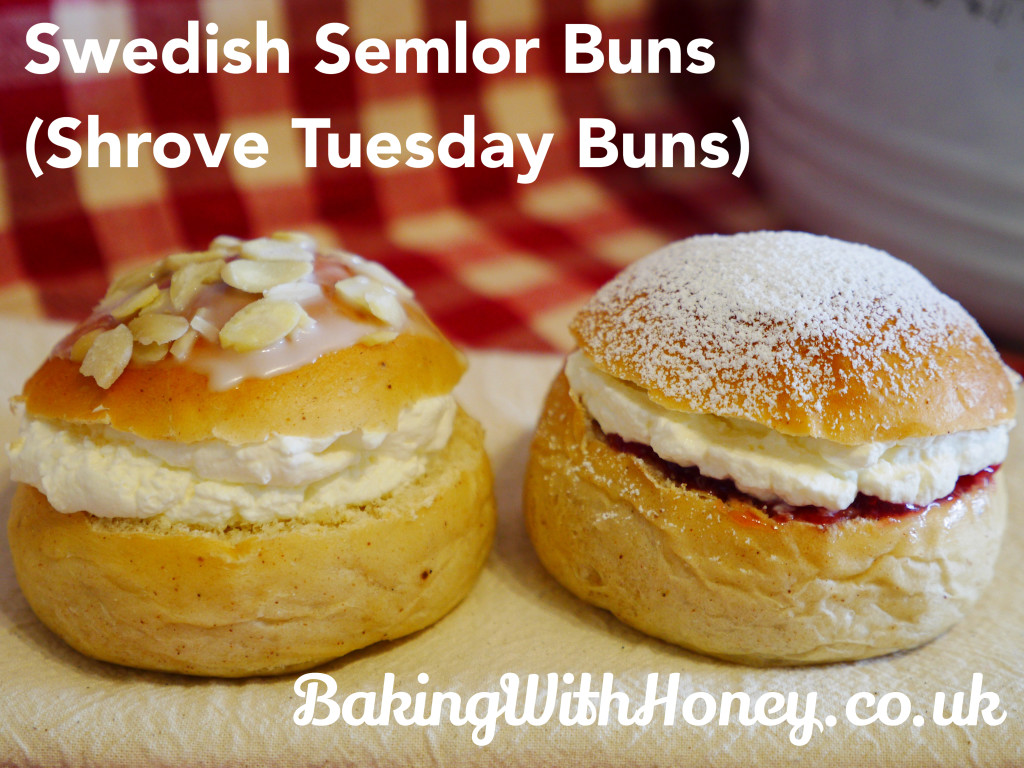 I’m always excited to dip my toe into Scandinavian creations, so when I first saw a photograph of these I just had to give them a go! Semlor buns are a massively popular bakery treat and were traditionally enjoyed during the run-up to Lent, but these days are commonly available from Christmas until Easter. They are known by several names (I particularly like the term ‘fastlagsbullar’ – literally, Fat Tuesday Buns) but the end results are all similar. They are simple, cardamom-scented bread buns made using a basic sweet (enriched) dough, spread with a creamy marzipan mixture and whipped cream. Finland likes to add a cheeky slick of raspberry jam under the cream and why on earth not? The traditional buns are usually finished with a smattering of flaked almonds; the raspberry ones are dusted with icing sugar. For this batch, I made half with jam and half without. Try them as something a bit different to pancakes this year – I promise you’ll love them!

For the filling:
160g marzipan (the best you can find, i.e. the highest almond content)
300ml whipping cream (reserve 60ml of this)
125g (ish) raspberry jam – optional, see notes above. I like mine best with this added!

To finish:
A large handful of flaked almonds (stuck on with a little glacé icing: 45g mixed until smooth with half a tablespoon of water will do it)
A little icing sugar for dusting (if you’re going for the raspberry jam option)

To make the dough: 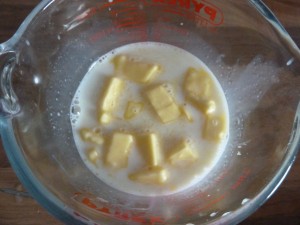 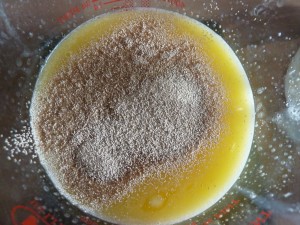 Measure the milk into a heatproof jug and put it in the microwave, on high, for about 90 seconds. Stir in  the sugar and cubed butter until melted. It helps if the butter is cold so that it can cool down the milk as it melts. Sprinkle in the yeast and whisk lightly, using a fork. 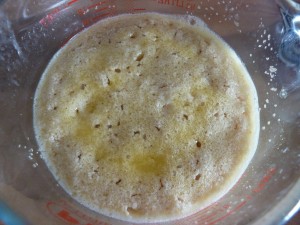 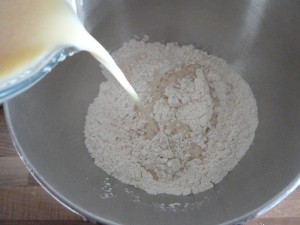 Leave it to stand for 15-20 minutes until the yeast creates a thick, bubbling foam on top of the butter and milk. Measure the flour, ground cardamom and salt into your mixer bowl. Briefly whisk the foamy milk mix so that it combines, then pour it on to the flour. Add the egg and use a wooden spoon or strong spatula to roughly bring the mixture together, scraping down the sides as you go. 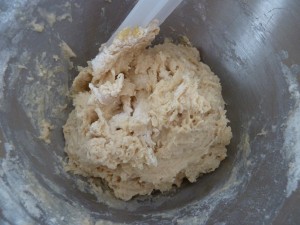 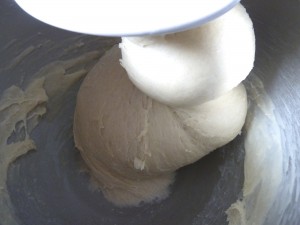 Once you have formed a rough ball, use the dough hook on a low setting to knead it. It will seem quite sticky; allow at least five minutes of kneading before deciding whether or not to add an extra tablespoon or so of flour. This is a lovely soft dough, too much flour will spoil it so go easy.
Scrape the dough out on to a floured surface and use your hands to gently make a smooth ball. 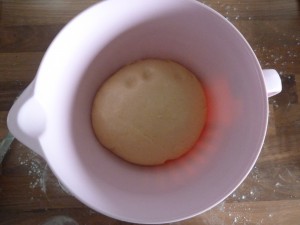 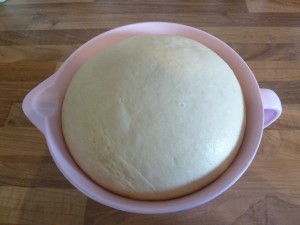 Place it into a large, oiled mixing bowl. Cover with a tea towel, shower cap (!) or cling film and leave it to rise for about an hour, or until doubled. Normal room temperature is fine (19-22c). If it’s really cold, seek out a warm place but otherwise, it really doesn’t matter. When it’s ready, tip it out and lightly knead for a minute or two, then divide into 12 equally sized balls. (If you’re a bit pedantic like me, you’re aiming for a weight of around 65-70g per ball. 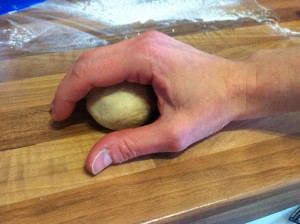 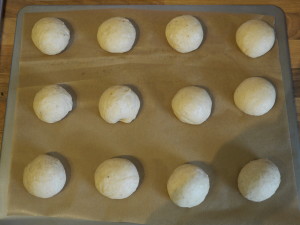 Take each piece of dough and roll it into a ball using the palms of you hands. Then, place on a worktop and use your hand to form a loose ‘cage’ around the dough, and use a circular motion to smooth the ball. It’s a bit tricky at first but it’s really easy once you’ve got the hang of it. If you can’t do it, just roll between your palms. Place on a large, lined baking sheet, allowing room for expansion (see pic). 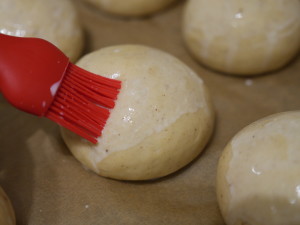 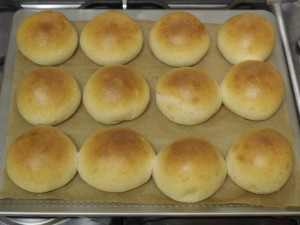 Cover loosely with a piece of cling film, or place in a large plastic bag. After about 40 mins-1hr, depending on how warm the room is, the balls should have just about doubled in size again. Meanwhile, preheat the oven to 190c/375f/gas mark 5. Brush the buns with a little milk and place in the middle of a hot oven. Bake for 15 minutes or until gorgeously golden. Place the tray on a cooling rack, and remove the buns to the rack as soon as you can handle them. They need to be completely cold before you move on to the next step. 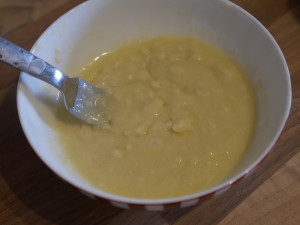 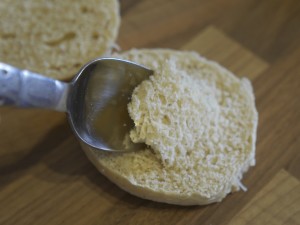 Grate the marzipan into a bowl and add 60ml, or about 4tbsp, of the (unwhipped) whipping cream. Mash it with a fork (or squidge it with your hands) until you’ve got something that looks like wallpaper paste. (Really tasty wallpaper paste!) Slice the tops off each bun. I say ‘tops’, I mean not quite half, or about a third. Scoop out about a dessertspoon of bread from the lower half of each bun. Be really careful not to go right through the bottom. 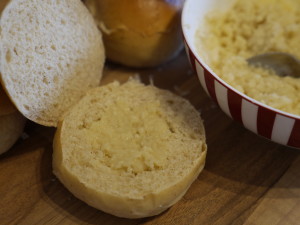 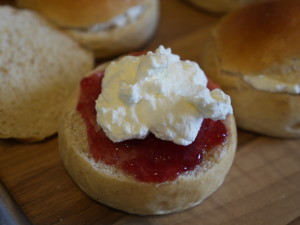 Crumble the scooped-out bread into the marzipan mix and stir until combined. Use a heaped teaspoon to fill the holes in the buns and flatten gently. If you’re using raspberry jam, spread it now. Add a dollop of cream (or pipe it if you’re feeling fancy) and pop the tops back on. 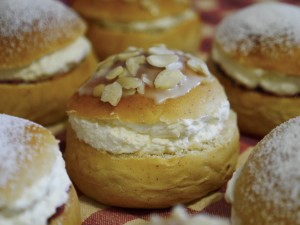 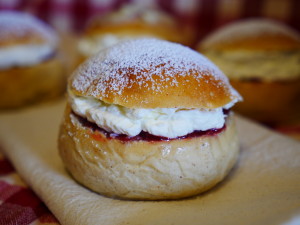 For plain cream buns, smooth half a teaspoon of glacé icing on top (in a little bowl simply mix 45g icing sugar with 1/2 tbsp water until smooth) and sprinkle the flaked almonds on top. For the raspberry version, simply dust with icing sugar (or you can add almonds if you like – it’s up to you!) These must be kept refrigerated, and although they are best served as soon as possible, they’ll keep for a few days. The bun is likely to soften though. There’s also nothing stopping you from freezing them if you like – defrost overnight in the fridge and eat as soon as possible. 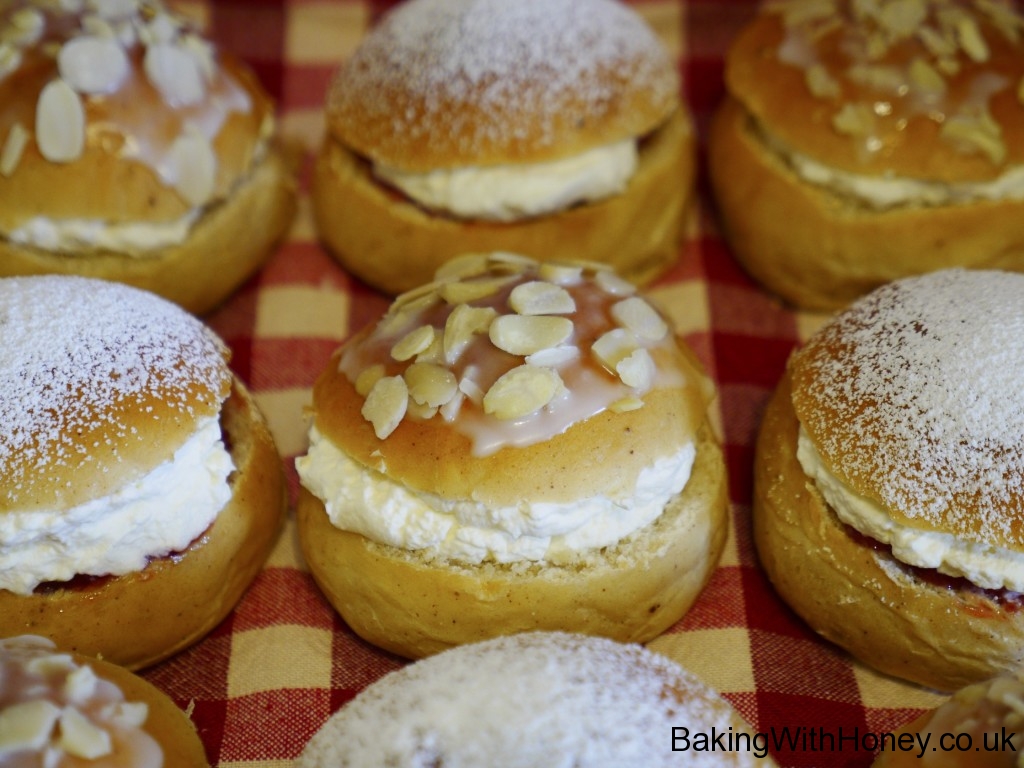