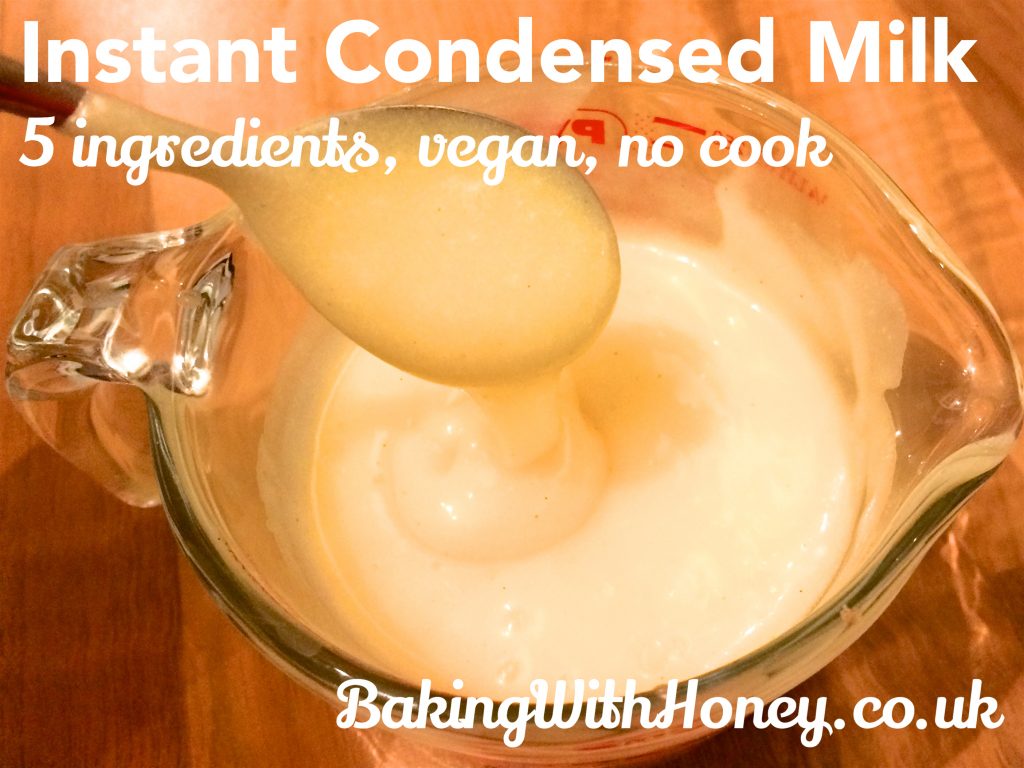 Sweetened condensed milk is one of those naff ingredients that is actually pretty handy to have in the cupboard as the key ingredient for all kinds of tooth-rotting deliciousness such as caramel, no-churn ice cream, banoffee pie and fudge. Recipes like salted caramel millionaires – definitely one of the most popular recipes on this blog – turn into quite a laborious process when you first have to make a vegan condensed milk from scratch, which generally involves boiling non-dairy milk and sugar for about three hundred years until you have reduced it to a sweetly thick and gloopy mass. So I am really excited to share this instant, no-sweat recipe which takes just a couple of minutes! It’s so easy you won’t believe it. I used Merchant Gourmet’s powdered coconut milk here, which does – obviously – leave a hint of coconut in the end result. (Which I happen to love – but each to their own!) Try using powdered soya or rice milk for a more neutral taste. Here in the UK I found the powdered coconut milk very easily in Holland and Barrett – other types would probably need to be bought online. When you find it, stock up!

I have no doubt I will link back to this recipe as a component of future recipes, so watch this space!

Makes around 400g, the equivalent of a standard tin of condensed milk.

Simply place the sugar, butter and vanilla into a heatproof bowl and pour the hot water over. Aim to pour it mostly over the butter as you want it to melt. Mix it all together until the it all looks combined then whisk in the milk powder until it is thick and smooth. You can use a mixer or hand blender if it’s easier. Done! It will thicken as it chills it in the fridge, and you can keep it there for about a week until you need it.