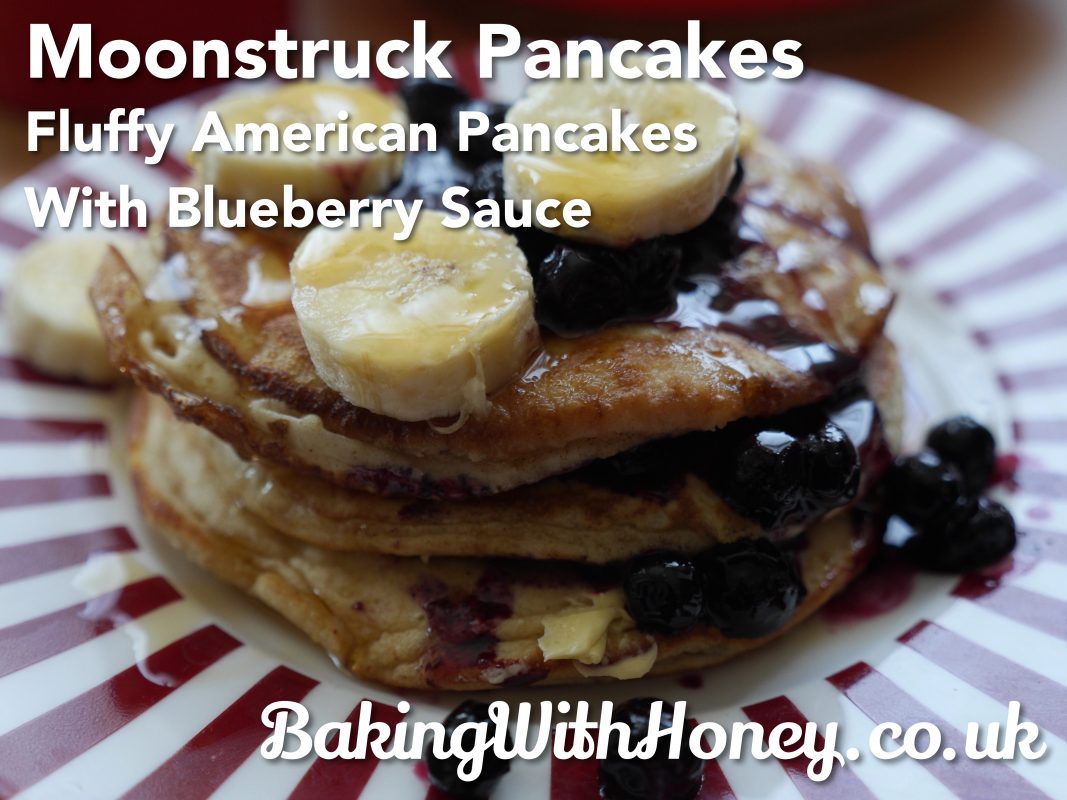 When I was a child, Pancake Day (never Shrove Tuesday) was a much looked-forward to event. My Grandad was always elected to make the pancakes, which resembled very thick, massively oversized (but still light and fluffy) crêpes. There was no recipe written down; and consequently they varied slightly from year to year. They were always saturated in squeezy lemon juice and granulated sugar – and sometimes golden syrup – and they remain one of the loveliest memories from my childhood. Years later, when I took an interest in making my own pancakes, I struggled to recreate them. Perhaps the joy of them was partly due to the person who made them. Eventually, during my early 20s, after several trips to New York and many, many trips to the Moonstruck Diner on 23rd street (and other glorious establishments still sporting mint and green pastel leatherette booths) I decided American pancakes were the best thing I’d ever eaten. Slathered in butter, maple syrup and blueberries – and served with salty bacon for my meat-eating friends – they felt like the High Priestess of breakfasts.

Forward a few years later to the summer of 2010, I returned to NYC with my husband-to-be. I was four months pregnant and I knew it would be our last trip abroad for at least a few years. We stayed at the infamous and notorious Hotel Chelsea (now closed in the name of property development) and decided to get married at City Hall. On the dirty-hot, cornflower-skied morning of our wedding, we walked down 23rd street to the Moonstruck Diner for a wedding day breakfast of black coffee, orange juice and the ubiquitous American pancakes, stacked with everything. (I was pregnant, after all). We rode the subway downtown to City Hall – me in a white dress and Blondie Converse boots – and got married. We strolled the streets back uptown to Chelsea to the toots and cheers from passing cars as I swung my little bouquet and drank pink lemonade Snapple from a street vendor. Back home in London, I was determined to recreate that perfect breakfast, and after many attempts and tweaks inspired by a vintage American recipe, this is the one I now use. Whenever I make these pancakes for my little family – always for breakfast in this house – I am reminded of the happiest day of my life.

This makes about 10 pancakes, using a 1/3 cup measurement for each one. Just halve the recipe if you don’t want this many. You will need a very small frying pan (or several small frying pans – I usually make three at a time just because it’s quicker!)

To serve: Maple syrup, butter, sliced bananas and blueberry sauce. Or whatever you like.

Optional blueberry sauce:
Melt a tablespoon of butter in a small pan. Whisk in a teaspoon of cornflour (cornstarch) and gently ‘cook’ for a minute or two. Add 100g blueberries and 50ml maple syrup. Simmer for five minutes or so until the blueberries start softening. Transfer to a jug or bowl and set aside until needed – it will thicken as it cools. Best served warm. I regularly make a big batch of this and freeze into portions for impromptu pancake days! 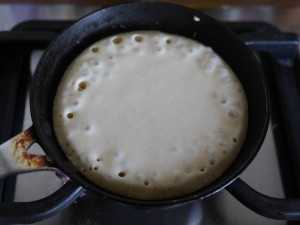 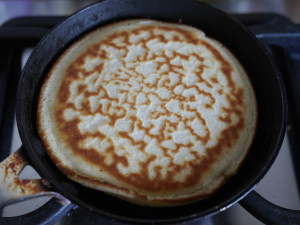 In a large bowl or jug, whisk together the eggs and milk until foamy. Add the oil and dry ingredients and whisk until you have a smooth batter. It’s important to make this when you need it – don’t be tempted to make it in advance as the strength of the baking powder will dull very quickly and you won’t get the desired springy, slightly spongy end result.

Heat the butter in the frying pan(s). I usually skewer a chunk of butter with a fork and just rub the pan with it between pancakes. That way you use just the right amount. When the butter starts bubbling, pour in 1/3 cup measurement (about 4-5 tbsp) into the pan. When the edges start to bubble after 2-3 minutes (see above left), flip the pancake. The bottom should look golden brown and just right. Cook the other side for just a minute or two until it looks done. If you’ve messed up and flipped too early, just flip it over again for an extra minute.

As you’re cooking, place each pancake into an ovenproof container (any lidded dish – like a Pyrex one – will do) and keep in a just-warm oven until all the pancakes are ready. They cool quite quickly so it’s best to keep them warm and eat them as soon as possible. Serve with your choice of toppings and plenty of coffee! 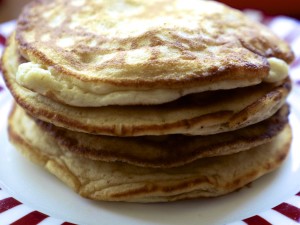 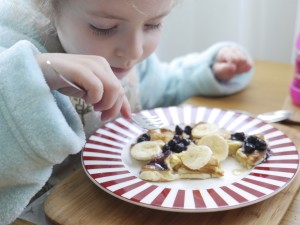