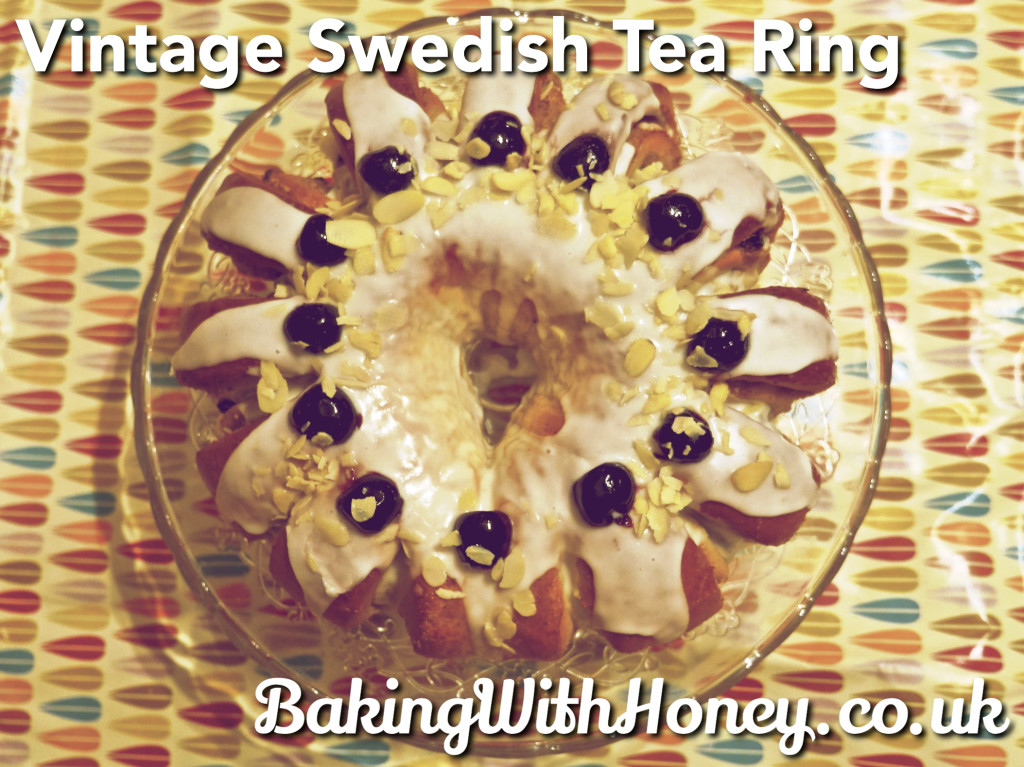 I’ve got a bit of a weakness for Scandinavian inspired recipes. Previous offerings on this blog include Havrebrød (oat and honey loaf) and the thrifty Bondepige Med Slør. Swedish Tea Ring (sometimes called a ‘garland’ or just bread) is a gem of a recipe. It’s somewhere between a sweetly spiced enriched bread and a pastry; with a buttery filling of dried fruits, cinnamon and brown sugar. Traditionally made as part of a Swedish Christmas feast, it is also a popular addition to birthdays or any other big day, and is usually eaten as a morning treat with coffee. It involves a couple of stages but it’s not complicated, and the results are so worthwhile! This seems to be another of those recipes that all the Nordic countries have laid claim to, and I could well have named it Scandinavian Tea Ring – but in my gorgeous vintage paperback cookbook, it is a Swedish Tea Ring, so I will stay true to it – I have only tweaked the recipe and method a little bit so that it is easier to make and slightly more generous with the filling. Many recipes add ground cardamom, but it is quite tricky to find here, and grinding cardamom seeds is such a chore. If you can get hold of some though, add some as indicated below. It gives a really unique, zesty aroma. The simple glacé icing with cherries and flaked almonds give this bake a lovely old-fashioned feel and add a deliciously sticky finish.

Serves 12, or more if you cut thinner slices. You’ll need a large baking sheet (or something like a pizza tray will do the job). Line it with a silicone mat or baking paper. 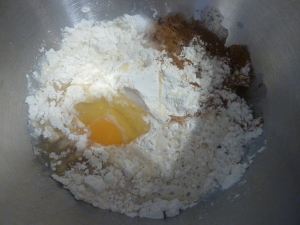 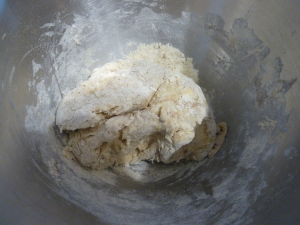 Heat the milk in the microwave on high for just a minute. Meanwhile, place all of the other dough ingredients into your mixing bowl. Pour the warm milk over and roughly bring together the ingredients using your hand or a wooden spoon. Once you’ve formed a shaggy-looking ball (it only takes a few seconds), either turn out and knead by hand or do what I do – put it under the dough hook for about 6 minutes. 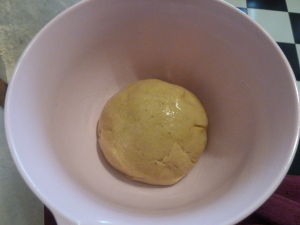 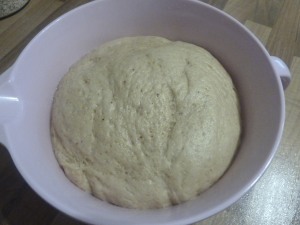 Once the dough feels smooth, transfer it to a large, oiled bowl and cover with cling film or a plastic shower cap for an hour or two until doubled in size. 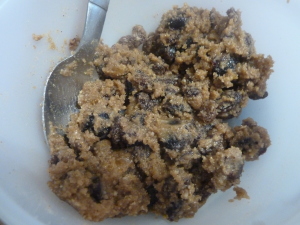 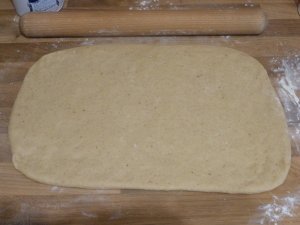 When the dough looks ready, you can make the filling. Melt the butter – about 30 seconds in the microwave should do it. In a bowl, combine the rest of the filling ingredients then pour in the butter. Combine until you’ve got a grainy, fruity looking mixture and set aside. Scrape out the risen dough and lightly knead for a few seconds. Roll into a rectangle shape, about 15″ x 9″. 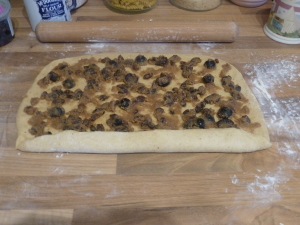 Dot the mixture over the dough, allowing about a half inch of space around all the edges. Try to spread out the mixture as evenly as possible, but be quite gentle with the dough. Roll up the rectangle, starting the long side nearest to you, as shown. Try to do this neatly and as tightly as possible. 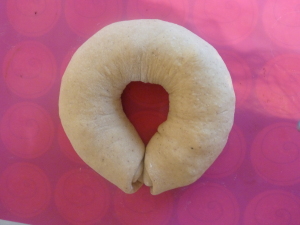 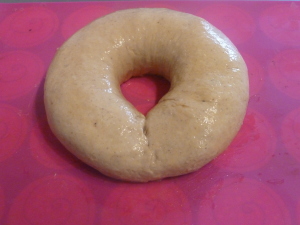 Once you’ve rolled up the dough, place it on to your prepared baking sheet (mine’s on a silicone mat). Brush with beaten egg, and do your best to paste the ends together. I’ve never managed to get a seam-free seal so don’t worry too much about it – the important thing is that the ends are joined together. 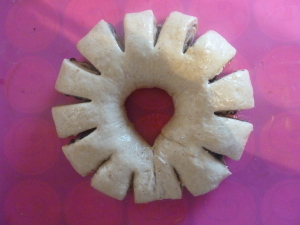 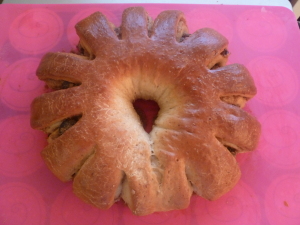 Use clean kitchen scissors or a knife to carefully slice the ring into twelve segments. (Or more, if you want to make it go further.) Only slice about half way through the dough, don’t go all the way through! Be sure to make the first cuts at either side of the join as shown above.
Cover with oiled cling film as best you can and let it rest for about half an hour or so – it will expand quite a bit in this time. Preheat the oven to 180c/350f/gas mark 4.

Bake in the centre of a preheated oven for 30-35minutes or until golden brown. It’s all too easy to over bake this so watch it carefully. Allow to cool completely on a cooling rack, then you can decorate. Simply combine the icing sugar and milk until you have a thick glace icing, and spoon it over the tea ring, guiding the icing down the sides of each portion. It will inevitably end up looking a bit messy but don’t worry, that’s part of the charm. Before the icing sets, decorate with the halved cherries and sprinkle the flaked almonds. Best eaten within 24 hours. 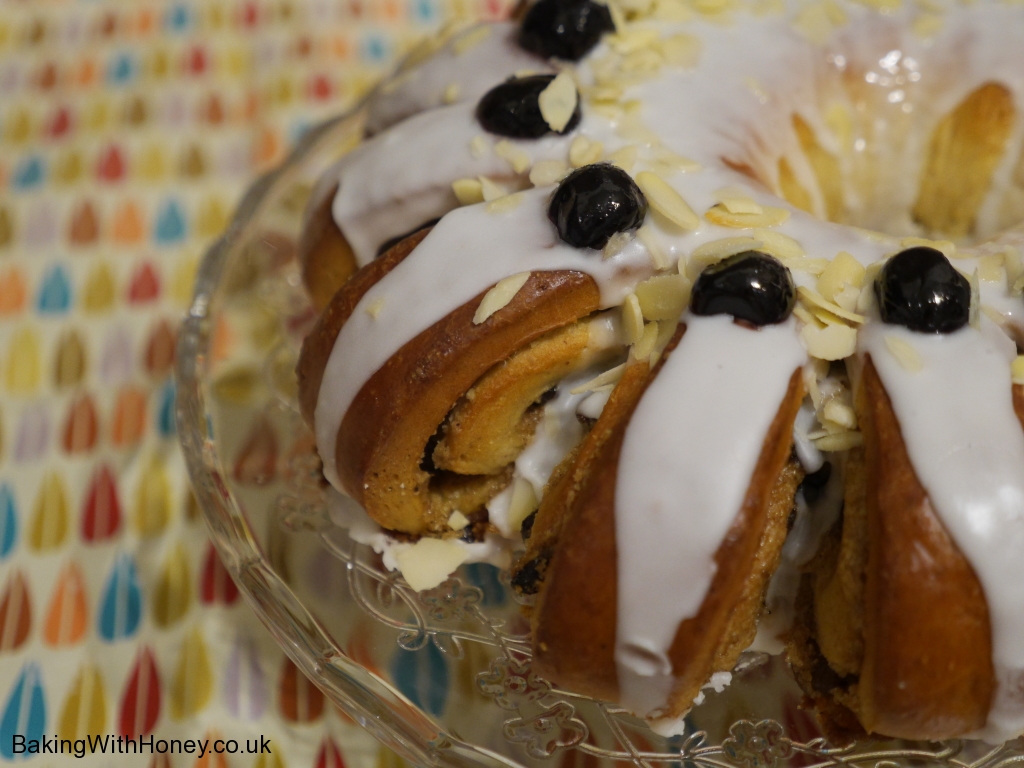